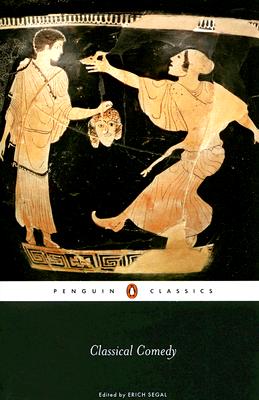 From the fifth to the second century B.C., theatrical comedy flourished in Greece and Rome. This new anthology brings together four essential masterworks of the genre: Aristophanes' bold, imaginative The Birds; Menander's The Girl from Samos, which explores popular contemporary themes of mistaken identity and sexual misbehavior; and two later Roman comic plays: Plautus's The Brothers Menaechmus, the inspiration for Shakespeare's The Comedy of Errors; and Terence's bawdy yet sophisticated double love plot, The Eunuch. Together, these four plays capture the genius of classical comedy for students, theatergoers, actors, lovers of satire, and anyone interested in the ancient world.

For more than seventy years, Penguin has been the leading publisher of classic literature in the English-speaking world. With more than 1,700 titles, Penguin Classics represents a global bookshelf of the best works throughout history and across genres and disciplines. Readers trust the series to provide authoritative texts enhanced by introductions and notes by distinguished scholars and contemporary authors, as well as up-to-date translations by award-winning translators.
Aristophanes was born, probably in Athens, c. 449 BC and died between 386 and 380 BC. Little is known about his life, but there is a portrait of him in Plato's Symposium. He was twice threatened with prosecution in the 420s for his outspoken attacks on the prominent politician Cleon, but in 405 he was publicly honored and crowned for promoting Athenian civic unity in The Frogs. Aristophanes had his first comedy produced when he was about twenty-one, and wrote forty plays in all. The eleven surviving plays of Aristophanes are published in the Penguin Classics series as The Birds and Other Plays, Lysistrata and Other Plays, and The Wasps/The Poet and the Women/The Frogs.

Menander (341-290 BC) was the most distinguished author of Greek New Comedy. An Athenian of good family, he wrote over a hundred plays, although only one survives intact today: Dyskolos or Old Cantankerous. This won the prize in 316 BC and was recovered from an Egyptian papyrus as recently as 1958. Many more fragments of his plays have since been discovered, and some sizeable pieces from The Rape of the Locks, The Arbitration and The Girl From Samos have been known since 1907. These confirm Menander’s skill in drawing humorous or romantic characters and making good dramatic use of a limited range of plots with stock scenes of disguise and recognition. Menander’s plays were revived in Athens after his death and some of them were adapted for the Roman stage by Plautus and Terence, through whom they strongly influenced light drama from the Renaissance onwards.

Titus Maccius Plautus was born in Sarsina, Umbria, in about 254 BC, and was originally named, after his father, Titus. Little is known of his life, but it is believed that he went to Rome when young and worked as a stage assistant. His potential as an actor was discovered and he acquired two other names: Maccius, derived perhaps from the name of a clown in popular farce, and Plautus, a cognomen meaning ‘flat-footed’.Somehow Plautus saved enough capital to go into business as a merchant shipper, but this venture collapsed, and he worked (says the tradition) as a miller’s laborer, and in his spare time studied Greek drama. From the age of forty onwards he achieved increasing success as an adaptor of Greek comedies for the Roman stage. Much of his work seems to be original, however, and not mere translation. He was rewarded by being granted Roman citizenship. According to Cicero he died in 184 BC.

Terence (c. 186-159 BC) was born at Carthage of Libyan parentage, and was brought to Rome as a young slave. According to Roman tradition his talents and good looks won him an education, manumission, and entry to a patrician literary circle, with whose encouragement he wrote six Latin plays, modeled on Greek New Comedy, all of which survive. Only one, The Eunuch, was a popular success in his lifetime, but he was read and admired in Roman times and throughout the Middle Ages, and became the main influence on Renaissance comedy.

Erich Segal was born in Brooklyn in 1937, and graduated from Harvard with a Bachelors degree in 1958, a Masters degree in 1959, and his Doctorate in 1964. At commencement in 1958, he became the first person in Harvard history to be selected as both Latin Salutatory Orator and Class Poet. He taught at Harvard before moving to Yale in 1964 and has since been Visiting Professor in Classics at Princeton and the University of Munich. In 1987 he retired as Adjunct Professor of Classics at Yale and is now a Fellow of Wolfson College, Oxford. In addition to his most important academic book, Roman Laughter: The Comedy of Plautus (Harvard University Press, 2nd ed. rev Oxford) Professor Segal has published widely on Greek Tragedy, Latin Poetry and ancient athletics. He has delivered papers before the American Philological Association, The American Comparative Literature Association, as well as the German Italian and British Classical Societies. Over the past quarter-century, Segal's verse translations of the Roman playwright Plautus have won considerable acclaim. His latest collection: Plautus: Four Comedies has just appeared in The Oxford World's Classics series. But Erich Segal has also had a parallel, and more conspicuous, career in pop literature. This began as a schoolboy hobby. He then collaborated on the famous Harvard Hasty Pudding Club show in 1958. While pursuing his PhD and beginning his academic career, he also wrote several screenplays--the most successful being The Beatles' 1968 animated film Yellow Submarine. He spent his summers in Hollywood and his winters at Yale. But his quietly equilibrated existence was upset overnight in 1970, when his first novel was published. Love Story was an immediate sensation, ultimately selling more than twenty-one million copies in thirty-three languages. Even after twenty-five years, the book is still in print and selling well. The phrase "Love means never having to say you're sorry" has since become proverbial and is now listed in numerous books of quotations, including the canonical Bartlett's. During this time, almost everyone offered an opinion. The year it was published, President Nixon told a press conference that, although he liked the book, he objected to some of the vulgar language (this was before the Watergate tapes). Twenty years later, comedian Billy Crystal chose it as a Christmas present for President Bush. It was officially banned in the Soviet Union as "decadent" and "counter-revolutionary." A pirated edition of Love Story even appeared in China (for circulation among member of the Party). In 1987 the film was finally shown in China, where the lines stretched for several miles to see it. For his screenplay to Love Story, Mr. Segal received the 1970 Golden Globe Award as well as one of the film's seven Oscar nominations. Perhaps most importantly--at least to Mr. Segal--is that he enjoyed a conspicuously unsuccessful career as a long-distance runner and was at one time one of the world's best known mediocre athletes. He completed over forty full-length marathons, winning only one: March 17, 1963 in Washington, DC. As fate would have it, The New York Times was on strike, but the Washington Post duly recorded the historic event. Erich Segal's other bestselling novels include, The Class, Doctors, Acts of Faith, and Prizes. Segal is married and has two daughters and currently lives near Oxford, England.