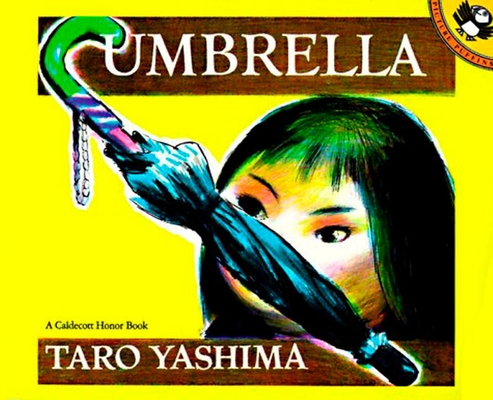 
On Our Shelves Now at:
Momo can't wait to use the red boots and umbrella she received on her birthday.  All she needs now is a rainy day!  Soft illustrations portray a thoughtful story about patience and growing independence.
Taro Yashima was the pseudonym of Atsushi Iwamatsu, a Japanese artist who lived in the United Staes during World War II. Iwamatsu was born September 21, 1908, in Nejima, Kimotsuki District, Kagoshima, and raised on the southern coast of Kyushu. His father was a country doctor who collected oriental art and encouraged his son to persue a career in art. After studying for three years at the Imperial Art Academy in Tokyo, Iwamatsu became a successful illustrator and cartoonist. At one point both he and his wife, Tomoe, went to jail for his opposition to the militaristic government. In 1939, they went to the United States to study art, leaving behind their son, Mako. After Pearl Harbor, Iwamatsu joined the US Army and went to work as an artist for the Office of Strategic Services. It was then that he first used the pseudonym Taro Yashima out of fear there would be repercussions for Mako and other family members if the Japanese government knew of his employment. He died in 1994.
"The anticipation, impatience, and joy of a little girl who waits for a rainy day to use her birthday umbrella are sensitively portrayed in a beautiful picture book." -Booklist