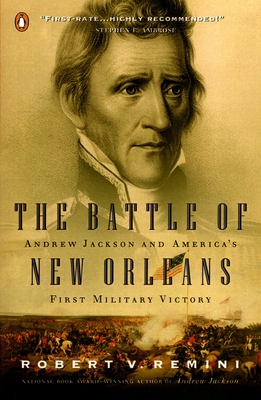 
Not On Our Shelves—Ships in 1-5 Days
The Battle of New Orleans was the climactic battle of America's "forgotten war" of 1812. Andrew Jackson led his ragtag corps of soldiers against 8,000 disciplined invading British regulars in a battle that delivered the British a humiliating military defeat. The victory solidified America's independence and marked the beginning of Jackson's rise to national prominence. Hailed as "terrifically readable" by the Chicago Sun Times, The Battle of New Orleans is popular American history at its best, bringing to life a landmark battle that helped define the character of the United States.
Robert V. Remini, whose three-volume biography, Andrew Jackson, won the National Book Award and was reissued in 1998 as a Main Selection of the History Book Club, is also the author of biographies of Henry Clay and Daniel Webster. He is professor emeritus of history and research professor emeritus of humanities at the University of Illinois at Chicago, and lives in Wilmette, Illinois.
"Impressive scholarship with a riveting narrative." —The New York Times Book Review

"Superbly written, fast-paced account of one of America's most significant but little-remembered military victories" —Forbes