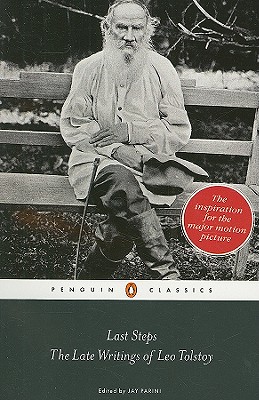 
Special Order—Subject to Availability
1910: Anna Karenina and War and Peace have made Leo Tolstoy the world's most famous author. But fame comes at a price. In the tumultuous final year of his life, Tolstoy is desperate to find respite, so leaves his large family and the hounding press behind and heads into the wilderness. Too ill to venture beyond the tiny station of Astapovo, he believes his last days will pass in isolation. But as we learn through the journals of those closest to him, the battle for Tolstoy's soul will not be a peaceful one. Jay Parini introduces, translates and edits this collection of Tolstoy's autobiographical writing, diaries, and letters related to the last year of Tolstoy's life published to coincide with the 2009 film of Parini's novel The Last Station: A Novel of Tolstoy's Final Year.

For more than seventy years, Penguin has been the leading publisher of classic literature in the English-speaking world. With more than 1,700 titles, Penguin Classics represents a global bookshelf of the best works throughout history and across genres and disciplines. Readers trust the series to provide authoritative texts enhanced by introductions and notes by distinguished scholars and contemporary authors, as well as up-to-date translations by award-winning translators.
Count Leo Tolstoy was born on September 9, 1828, in Yasnaya Polyana, Russia. Orphaned at nine, he was brought up by an elderly aunt and educated by French tutors until he matriculated at Kazan University in 1844. In 1847, he gave up his studies and, after several aimless years, volunteered for military duty in the army, serving as a junior officer in the Crimean War before retiring in 1857. In 1862, Tolstoy married Sophie Behrs, a marriage that was to become, for him, bitterly unhappy. His diary, started in 1847, was used for self-study and self-criticism; it served as the source from which he drew much of the material that appeared not only in his great novels War and Peace (1869) and Anna Karenina(1877), but also in his shorter works. Seeking religious justification for his life, Tolstoy evolved a new Christianity based upon his own interpretation of the Gospels. Yasnaya Polyana became a mecca for his many converts. At the age of eighty-two, while away from home, the writer suffered a break down in his health in Astapovo, Riazan, and he died there on November 20, 1910.

Jay Parini teaches English at Middlebury College and is the author of five novels, including The Last Station. He lives in Vermont.