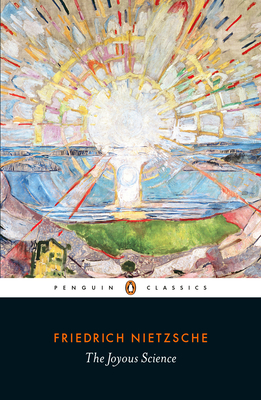 
Special Order—Subject to Availability
Grounded in his famous notion that "God is dead," Nietzsche's most personal book--and one of his best

The Joyous Science--also known as The Gay Science and The Joyful Wisdom--is a liberating voyage of discovery as Nietzsche's realization that "God is dead" and his critique of morality, the arts and modernity give way to an exhilarating doctrine of self-emancipation and the concept of eternal recurrence. Here is Nietzsche at his most personal and affirmative; in his words, this is a book of "exuberance, restlessness, contrariety and April showers." With its unique voice and style, its playful combination of poetry and prose, and its invigorating quest for self-emancipation, The Joyous Science is a literary tour de force and quite possibly Nietzsche's best book.

For more than seventy-five years, Penguin has been the leading publisher of classic literature in the English-speaking world. With more than 2,000 titles, Penguin Classics represents a global bookshelf of the best works throughout history and across genres and disciplines. Readers trust the series to provide authoritative texts enhanced by introductions and notes by distinguished scholars and contemporary authors, as well as up-to-date translations by award-winning translators.
Friedrich Nietzsche was born near Leipzig in 1844. When he was only twenty-four he was appointed to the chair of classical philology at Basel University. Works published in the 1880s include The Gay Science, Thus Spoke Zarathustra, Beyond Good and Evil, On the Genealogy of Morals, Twilight of the Idols, and The Antichrist. In January 1889, Nietzsche collapsed on a street in Turin and was subsequently institutionalized, spending the rest of his life in a condition of mental and physical paralysis. Works published after his death in 1900 include Will to Power, based on his notebooks, and Ecce Homo, his autobiography.

R. Kevin Hill is an associate professor of philosophy at Portland State University. He is the author of Nietzsche's Critiques: The Kantian Foundations of His Thought (2003) and Nietzsche: A Guide for the Perplexed (2007), and cotranslator of Nietzsche's The Will to Power.