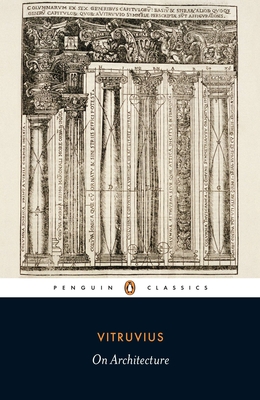 By Vitruvius, Richard Schofield (Translated by), Robert Tavernor (Introduction by)


Not On Our Shelves—Ships in 1-5 Days
In De architectura (c.40 BC), Vitruvius discusses in ten encyclopedic chapters aspects of Roman architecture, engineering and city planning. Vitruvius also included a section on human proportions. Because it is the only antique treatise on architecture to have survived, De architectura has been an invaluable source of information for scholars. The rediscovery of Vitruvius during the Renaissance greatly fuelled the revival of classicism during that and subsequent periods. Numerous architectural treatises were based in part or inspired by Vitruvius, beginning with Leon Battista Alberti's De re aedificatoria (1485).

For more than seventy years, Penguin has been the leading publisher of classic literature in the English-speaking world. With more than 1,700 titles, Penguin Classics represents a global bookshelf of the best works throughout history and across genres and disciplines. Readers trust the series to provide authoritative texts enhanced by introductions and notes by distinguished scholars and contemporary authors, as well as up-to-date translations by award-winning translators.
Marcus Vitruvius Pollio (late 1st century B.C.), was a Roman military architect and engineer, and an expert in ballistic machines in particular.

Richard Schofield read Classics at Oxford in the late 1960s, then architectural history at the Courtauld Institute of Art, London. After working at the University of Nottingham for many years, he moved to the Istituto universitario di architettura di Venezia in 1997, where he is the Professor of the History of Architecture.