The Government of No One: The Theory and Practice of Anarchism (Pelican Books) (Paperback) 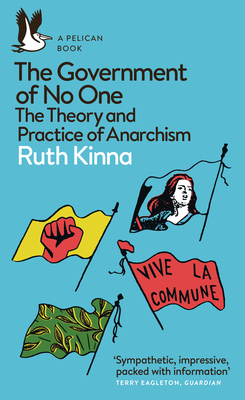 The Government of No One: The Theory and Practice of Anarchism (Pelican Books) (Paperback)


Backordered
Often associated with chaos or disorder, anarchy defies definition and routinely gets a bad press. And yet from Occupy to Pussy Riot, Noam Chomsky to David Graeber, this philosophical and political movement is as relevant as ever. Contrary to popular perception, different strands of anarchism—from individualism to collectivism—do follow certain structures and a shared sense of purpose: a belief in freedom and working towards collective good without the interference of the state. In this masterful, sympathetic account, political theorist Ruth Kinna traces the tumultuous history of anarchism, starting with thinkers and activists such as Peter Kropotkin and Emma Goldman and through key events like the Paris Commune and the Haymarket affair. Skillfully introducing us to the nuanced theories of a range of anarchist groups from around the world, The Government of No One reveals what makes a supposedly chaotic movement particularly adaptable and effective over centuries.
Ruth Kinna is a professor of Political Theory at Loughborough University, working in the Department of Politics, History and International Relations, where she specializes in political philosophy. She is the author of Anarchism: A Beginner's Guide and co-editor of the journal Anarchist Studies.
"Will be the standard text on anarchism for the twenty-first century. Written with brio, quiet insight and clarity and taking us from the nineteenth century anarchist Proudhon to Occupy and Rojava, this offering will appeal to the novice student, the activist and the grizzled professor. Quite a feat." —Carl Levy

"Will undoubtedly become obligatory reading for those who wish to learn about anarchism." —Times Higher Education

"A sympathetic, impressively well-informed history of the movement ... packed with information about this rich history." —Guardian