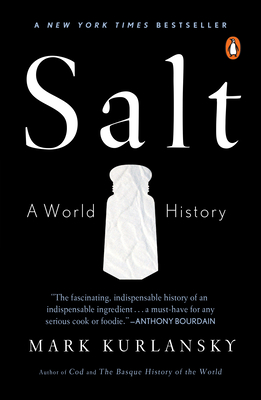 In his fifth work of nonfiction, Mark Kurlansky turns his attention to a common household item with a long and intriguing history: salt. The only rock we eat, salt has shaped civilization from the very beginning, and its story is a glittering, often surprising part of the history of humankind. A substance so valuable it served as currency, salt has influenced the establishment of trade routes and cities, provoked and financed wars, secured empires, and inspired revolutions.  Populated by colorful characters and filled with an unending series of fascinating details, Salt is a supremely entertaining, multi-layered masterpiece.

Mark Kurlansky is the New York Times bestselling author of Cod, Salt, Paper, The Basque History of the World, 1968, The Big Oyster, International Night, The Eastern Stars, A Continent of Islands, and The White Man in the Tree and Other Stories. He received the Dayton Literary Peace Prize for Nonviolence, Bon Appetit's Food Writer of the Year Award, the James Beard Award, and the Glenfiddich Award. Salt was a Los Angeles Times Book Prize finalist. He spent ten years as Caribbean correspondent for the Chicago Tribune. He lives in New York City. www.markkurlansky.com.

"Kurlansky finds the world in a grain of salt...fascination and surprise regularly erupt from the detail." —The New York Times Book Review

This is terrific food writing; like fleur de sel, something scarce and to be savored." —San Francisco Chronicle

"Kurlansky continues to prove himself remarkably adept at taking a most unlikely candidate and telling its tale with epic grandeur. " —Los Angeles Times Book Review

"If you are drawn to history and curious about the origins of foods, allow Mark Kurlansky to take you on an incredible journey through the centuries by way of salt." —The Baltimore Sun

"Kurlansky does a masterful job of expanding the reader's horizons....This book of minutely researched data and history can literally make the mouth water." —The Boston Globe