The Will to Meaning: Foundations and Applications of Logotherapy (Paperback) 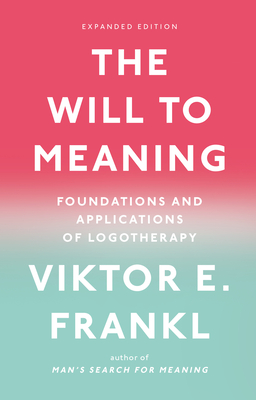 The Will to Meaning: Foundations and Applications of Logotherapy (Paperback)

From the author of Man's Search for Meaning, one of the most influential works of psychiatric literature since Freud.

Holocaust survivor Viktor E. Frankl is known as the founder of logotherapy, a mode of psychotherapy based on man's motivation to search for meaning in his life. The author discusses his ideas in the context of other prominent psychotherapies and describes the techniques he uses with his patients to combat the "existential vacuum."

Originally published in 1969 and compiling Frankl's speeches on logotherapy, The Will to Meaning is regarded as a seminal work of meaning-centered therapy. This new and carefully re-edited version is the first since 1988.

Viktor E. Frankl (1905-1997) was Professor of Neurology and Psychiatry at the University of Vienna. During World War II, he spent three years in Auschwitz, Dachau, and other concentration camps. He was the founder of the Third Viennese School of Psychotherapy—the school of logotherapy—and President of the Austrian Medical Society of Psychotherapy. His twenty-nine books have been translated into twenty-one languages.

“Perhaps the most significant thinking since Freud and Adler.”—The American Journal of Psychiatry

“Frankl is one of the most famous and gifted of all psychiatrists… The incredible attempts to dehumanize man at Auschwitz and Dachau led Frankl to commence the humanization of psychiatry through logotherapy. Frankl is a professional who possesses the rare ability to write in a layman’s language.”—Dr. Gerald F. Kreyche, professor emeritus at DePaul University

“I regard this book as one of the outstanding contributions to psychological thought in the last fifty years.”—Dr. Carl Rogers, author of Client-Centered Therapy

“Dr. Frankl’s contribution to psychotherapy has been great. He is perhaps the only non-behaviorist to have contributed a method to behavior therapy. The modesty with which he has put forward his important work has been remarkable.”—Dr. Joseph Wolpe, author of The Practice of Behavioral Therapy