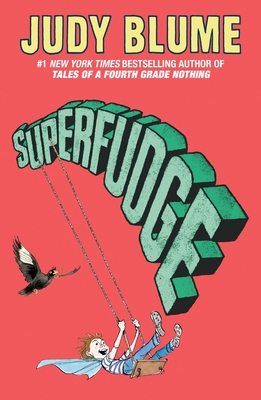 
On Our Shelves Now at:
Part of the classic Fudge series from Judy Blume, bestselling author of Tales of a Fourth Grade Nothing!

Farley Drexel Hatcher—otherwise known as Fudge—thinks he’s a superhero, but his older brother, Peter, knows Fudge is nothing but a big pain! Dealing with Fudge is hard enough, but now Peter’s parents have decided to move to New Jersey for an entire year! Even worse, Peter’s mom is going to have a new baby. And if this baby is anything like Fudge—help! How will Peter ever survive?

Love Fudge, Peter, and Sheila? Read all these books featuring your favorite characters:
Tales of a Fourth Grade Nothing
Otherwise Known as Sheila the Great
Fudge-a-Mania
Double Fudge
JUDY BLUME spent her childhood in Elizabeth, New Jersey, making up stories inside her head. She spent her adult years in many places, doing the same thing, only now she writes her stories down on paper. Her numerous books have won many awards, including the National Book Foundation’s Medal for Distinguished Contribution to American Letters.

Tales of a Fourth Grade Nothing is the first in a five-book series about Peter, Fudge, and Sheila.
Judy lives with her husband in Key West and New York City. You can visit her at judyblume.com.
Praise for Judy Blume and the Fudge books:

“Each [Fudge book] is packed with wacky earthy disasters that are her trademark and that children love to read about . . . Judy Blume has a knack for knowing what children think about and an honest, highly amusing way of writing about it.” —The New York Times

“It’s a pleasure to watch a talented author like Judy Blume consistently create books that reflect a
remarkable ability for combining humor with perceptive insight into a child’s world.” —Publishers Weekly

“Blume has her eye on the fine details of life, whether funny or frustrating.” —Booklist

“For anyone who has ever been ‘burdened’ by a pesky younger brother, there’s fast and funny
reading in this story.” —Children’s Digest on Tales of a Fourth Grade Nothing

“As usual, Blume’s humor and pitch-perfect ear for sibling rivalry and family dynamics will have readers giggling with recognition. Newcomers and Fudge fans alike will savor this installment in the well-loved series.” —Booklist on Double Fudge