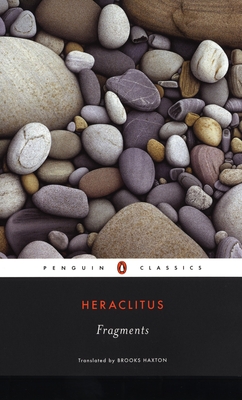 By Heraclitus, Brooks Haxton (Translated by), James Hillman (Foreword by)

In the sixth century b.c.-twenty-five hundred years before Einstein--Heraclitus of Ephesus declared that energy is the essence of matter, that everything becomes energy in flux, in relativity. His great book, On Nature, the world's first coherent philosophical treatise and touchstone for Plato, Aristotle, and Marcus Aurelius, has long been lost to history--but its surviving fragments have for thousands of years tantalized our greatest thinkers, from Montaigne to Nietzsche, Heidegger to Jung. Now, acclaimed poet Brooks Haxton presents a powerful free-verse translation of all 130 surviving fragments of the teachings of Heraclitus, with the ancient Greek originals beautifully reproduced en face.

For more than seventy years, Penguin has been the leading publisher of classic literature in the English-speaking world. With more than 1,700 titles, Penguin Classics represents a global bookshelf of the best works throughout history and across genres and disciplines. Readers trust the series to provide authoritative texts enhanced by introductions and notes by distinguished scholars and contemporary authors, as well as up-to-date translations by award-winning translators.
Brooks Haxton's poetry translations include Dances for Flute and Thunder: Poems from the Ancient Greek, which was nominated for a PEN translation award, and Victor Hugo's Selected Poems for Penguin Classics.

James Hillman has written more than twenty books, including The Force of Character, Re-Visioning Psychology (nominated for a Pulitzer in 1975), and The Soul’s Code, which debuted at #1 on the New York Times bestseller list in 1996. He is an internationally renowned lecturer, teacher, and psychologist and has taught at Yale, Syracuse, and the University of Chicago. Born in New Jersey, Hillman now lives in Thompson, Connecticut.
"Heraclitus's fragments come to us like sparks off an anvil. . . . a luminous translation." (Nicholas Christopher)

"A pellucid and informed translation." (Rita Dove, The Washington Post)