Nelson's Trafalgar: The Battle That Changed the World (Paperback) 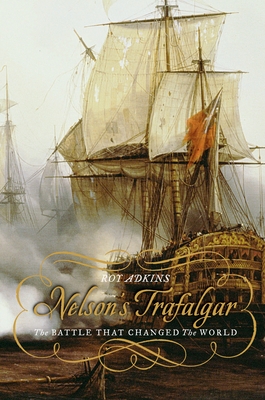 Nelson's Trafalgar: The Battle That Changed the World (Paperback)


Not On Our Shelves—Ships in 1-5 Days
An explosive chronicle of history's greatest sea battle, from the co-author of the forthcoming Gibraltar: The Greatest Siege in British History (March 2018)

In the tradition of Antony Beevor's Stalingrad, Nelson's Trafalgar presents the definitive blow-by-blow account of the world's most famous naval battle, when the British Royal Navy under Lord Horatio Nelson dealt a decisive blow to the forces of Napoleon. The Battle of Trafalgar comes boldly to life in this definitive work that re-creates those five momentous, earsplitting hours with unrivaled detail and intensity.
Roy Adkins is a historian and archaeologist. He is also a Fellow of the Society of Antiquaries in London. His previous books include The Keys of Egypt: The Obsession to Decipher Egyptian Hieroglyphs, Dictionary of Roman Religion, and Handbook to Life in Ancient Rome.
“Captures the din, confusion, and sheer carnage of the battle. Mr. Adkins reminds us that ‘in the cramped gun decks the noise of the battle could be felt as much as heard: a maddening sensation of pressure on the skull.’”
—The Wall Street Journal

“Wonderful. . . . Blazing . . .  [Nelson’s Trafalgar] is at least the equal of [Antony Beevor’s] Stalingrad in blood, pace and detail, but it also boasts a welcome twist to the genre with a lacing of black humour.”
—The Independent on Sunday (London)

“Hugely satisfying. Those who share my appetite for particulars will delight in this book.”
—The Boston Globe

“Excellent. . . . Adkins is at his best on the nuances of seamanship and the minutiae of life within the wooden walls.”
—The Independent

“This illustrious introduction to the Battle of Trafalgar from an archaeologist and historian is one of the best in generations for the non-seafaring reader curious about the nautical epic, and it also handsomely rewards those whose study of the battle goes back a generation or two.”
—Publishers Weekly (starred review)

“Masterful in explaining why Nelson’s men were so much more efficient. . . . Adkins has written a compelling account.”
—Bernard Cornwell, Mail on Sunday (London)

“Well-written and makes good use of first-hand accounts.”
—Literary Review

“Adkins’s painstaking digging, sifting, arranging and questioning take him everywhere on Nelson's fleet . . . His account of the battle is a gripping album of snapshots from the quarterdecks and gun decks of the ships themselves . . . A most eclectic but engaging book.”
—The Spectator