Civilization: The West and the Rest (Paperback) 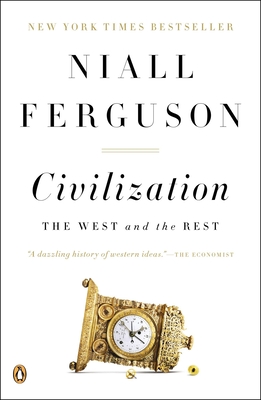 Civilization: The West and the Rest (Paperback)

“A dazzling history of Western ideas.” —The Economist

“Mr. Ferguson tells his story with characteristic verve and an eye for the felicitous phrase.” —Wall Street Journal

Western civilization’s rise to global dominance is the single most important historical phenomenon of the past five centuries.

How did the West overtake its Eastern rivals? And has the zenith of Western power now passed? Acclaimed historian Niall Ferguson argues that beginning in the fifteenth century, the West developed six powerful new concepts, or “killer applications”—competition, science, the rule of law, modern medicine, consumerism, and the work ethic—that the Rest lacked, allowing it to surge past all other competitors.

Yet now, Ferguson shows how the Rest have downloaded the killer apps the West once monopolized, while the West has literally lost faith in itself. Chronicling the rise and fall of empires alongside clashes (and fusions) of civilizations, Civilization: The West and the Rest recasts world history with force and wit. Boldly argued and teeming with memorable characters, this is Ferguson at his very best.
Niall Ferguson is one of the world's most renowned historians. He is the author of Paper and Iron, The House of Rothschild, The Pity of War, The Cash Nexus, Empire, Colossus, The War of the World, The Ascent of Money, High Financier, Civilization, The Great Degeneration, Kissinger, 1923-1968: The Idealist, and The Square and the Tower. He is Senior Fellow at the Hoover Institution, Stanford University, and a Visiting Professor at Tsinghua University, Beijing. His many awards include the Benjamin Franklin Prize for Public Service (2010), the Hayek Prize for Lifetime Achievement (2012) and the Ludwig Erhard Prize for Economic Journalism (2013).
“[Ferguson] uses his powerful narrative talents in these pages to give the reader a highly tactile sense of history. . . . The author [has a] knack for making long-ago events as vivid and visceral as the evening news, for weaving anecdotes and small telling details together with a wide-angled retrospective vision.” —New York Times

“A dazzling history of Western ideas.” —The Economist

“Mr. Ferguson tells his story with characteristic verve and an eye for the felicitous phrase.” —Wall Street Journal

“This is sharp. It feels urgent. Ferguson, with a properly financially literate mind, twists his knife with great literary brio . . . Ferguson ends by suggesting the biggest threat is not China but ourselves—our cowardice, drawn from ignorance, even stupidity, about our past. He is right. But as he shows himself, that can be fixed.” —The Financial Times

“The author boldly takes on 600 years of world events . . . so that the history lesson remains fresh and compelling . . . A richly informed, accessible history lesson.” —Kirkus (starred)