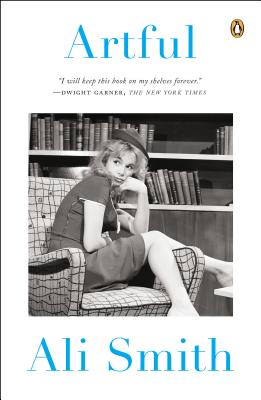 
Special Order—Subject to Availability
“A stimulating combination of literary criticism, essay, and fiction” (The New Yorker) from the incomparable Ali Smith

Artful is a celebration of literature’s worth in and to the world—it is about the things art can do, the things art is made of, and the quicksilver nature of all artfulness. A magical hybrid that refuses to be tied down to either fiction or the essay form, Artful is narrated by a character who is haunted—literally—by a former lover, the writer of a series of lectures about art and literature. Ali Smith’s heady powers as a novelist and short story writer harmonize with her keen perceptions as a reader and critic to form a living thing that reminds us that life and art are never separate.
Ali Smith is the author of nine works of fiction, including Hotel World and The Accidental, shortlisted for the Man Booker Prize and winner of the Whitbread Award. She lives in Cambridge, England.
"A stimulating combination of literary criticism, essay, and fiction. Smith’s writing is ethereal... funny."
—The New Yorker

"These brief, acrobatic lectures... perform spectacular feats of criticism. Each is as playful as it is powerful, as buoyant as it is brilliant."
—NPR Books

"A wordsmith to the very smithy of her soul, [Smith] is at once deeply playful and deeply serious. And her new book, in which she tugs at God's sleeve, ruminates on clowns, shoplifts used books, dabbles in Greek and palavers with the dead, is a stunner."
—New York Times Book Review

"What a treat…. Artful is a love story full of everything - mind and body, past, present and future. The last lines of this wonderful book are spoken by the narrator: '(Who did I think I was talking to? You.)' Thank you, Ali Smith, from all of us."
—San Francisco Chronicle

"Smith dealt before with grief in relation to the passing of time in her 2001 novel, Hotel World. The clever structure on show in Artful allows her to expand on this theme and enables the reader to delve back in at random and be entranced all over again."
—Minneapolis Star Tribune

"Ms. Smith has an agile and mischievous mind. I will keep this book on my shelves forever, I suspect, for one line alone, a play on the song 'Smile,' made famous by Nat King Cole. (Charlie Chaplin wrote the music.) 'Simile,' Ms. Smith writes, 'though your heart is breaking.' If that doesn't make you happy you may be, like the writer in this book, dead... It's speckled with elegant allusion... It's a book with unusual nooks and crannies, a book that pulses with minor-chord heartache... What matters in both life and literature, this book suggests, is to keep trying to connect."
—Dwight Garner, The New York Times

"One of the marvelous things about this book is its reconciliation of the serious — both in the form of this crumbling, smelly guest and in its ardent advocacy of art — and light. Smith, whose love of words and skill at wordplay has already been made apparent in her stories and novels, performs dodge after dodge after dodge… What Smith has done with Artful is to invent a new form apart from form, to build a kind of Frankenstein’s monster inside the act of art."
—The Los Angeles Review of Books

"Artful is full of crossings and parallels. It is thought in 3-D. It is artful, which the book itself observes is the name given to the Oliver Twist character of the Dodger: the one who animates the story, who brings life to it."
—St. Louis Post-Dispatch

"Contemplative, electrifying, and transformative....Through riveting reflections on the limitations and the limitlessness of stories, Smith considers four aspects of the endeavor of creation: on 'time, 'form,' 'edge,' and 'offer and reflection.' The results are redemptive for everyone, testifying with singular clarity and wit to the immutable necessity for art."
—Publishers Weekly (starred review)

"[An] extraordinary journey... Smith's storytelling facility and critical eye are evident in the fact that this ongoing conversation about time, memory, loss, longing, love, art and nature stirs the mind and heart all the more because it takes place between the imagination and reality. A soulful intellectual inquiry and reflection on life and art, artfully done."
—Kirkus Reviews

"Smith daringly splits herself into two captivating voices... This scintillating conversation showcases Smith’s own gifts as a creative writer. But it also reminds readers of how great literature—of Shakespeare, Lawrence, Hopkins, Ovid, Plath, Rilke, and Flaubert—requires them to reorient their line of vision. Nothing—Smith shows her reader—forces such reorientation more than violating conventional boundaries, often in dangerous ways. These most unlecture-like of lectures deliver the thrill of perilous border crossings."
—Booklist

"Smart, allusive, informal, playful, audacious. (It's true. I think I am in love with Ali Smith.) Artful is a gift from Ali Smith to her reader. It's a book no one else could have written, or would have. Smith has a critic's eye, but fills her book with the novelist's art, and the novelist's heart."
—Independent on Sunday

"Glittering inventiveness. Not just a ghost story, but also a love letter. As emotionally freighted as a piece of storytelling, as intellectually rigorous as an academic's essay."
—Independent

"Smith's exuberance and cleverness delight. This is a sparky, inspiring, charm-laden little book that makes you want to read more and differently."
—The Week

"A wonderful achievement. Smith is so readable, likable, witty, and difficult to put down, that it makes you wonder why more people don't make use of her. She could make David Cameron interesting. Artful is a uniquely accessible work of criticism at the same time as it's a haunting fictional portrayal of grief, lost love and the power of art. Smith possesses rare levels of genius. She deserves to be read and discussed by every single person who has an interest in literature today."
—Bookmunch