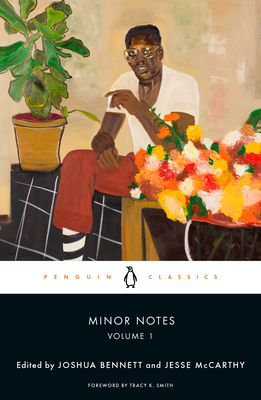 
Not Yet Published—Pre-Order Now
A new Penguin Classics series that recovers and rediscovers the work of African American poets from the 19th and 20th centuries, curated by Joshua Bennett and Jesse McCarthy

As scholars of African American literature and cultural history, Bennett and McCarthy repeatedly find themselves struck by the number of exciting poets they come across in long-out-of-print collections and forgotten journals, whose work has been neglected and, in some cases, entirely ignored, even by those academic circles devoted to the study of Black poetry. Minor Notes is an excavation initiative that addresses this problem by recovering archival materials from these understudied, though supremely gifted, African American poets of the 19th and 20th
centuries. By pairing neglected collections of poetry with prefatory commentary provided by contemporary poets, Minor Notes bridges scholarly interest with the growing audience outside the university that reads, writes, and circulates Black poetry.
Minor Notes Vol. 1 features the work of three poets. Published in 1837, Poems by a Slave is one of the lesser-known works by George Moses Horton (1798-1883), once popularly known as the “black bard of North Carolina.” Visions of the Dusk (1915) is an American prose poem known for its formal innovation by Fenton Johnson, a poet, essayist, editor, and educator from Chicago. Georgia Douglas Johnson was the most widely read black woman poet in the US during the first three decades of the 20th century. Bronze: A Book of Verse (1922) was introduced with a foreword by W.E.B. Du Bois. Bennett and McCarthy will provide an introduction and Suggestions for Further Reading.
Joshua Bennett is a Professor of English and Creative Writing at Dartmouth College. He is the author: The Sobbing School (Penguin, 2016) a finalist for an NAACP Image Award, Property Once Myself (Harvard, 2020) and Owed (Penguin, 2020). He received the 2021 Whiting Award for Poetry and Nonfiction. His first work of narrative nonfiction, Spoken Word: A Cultural History, is forthcoming from Knopf in 2023.

Jesse McCarthy is assistant professor of English and African and African American studies at Harvard University. He is an editor at the Point and has written for n+1, Dissent, the Nation, and the New Republic. His critically acclaimed essay collection Who Will Pay Reparations on My Soul? (Liveright 2021) was a NYT Editor’s Choice.