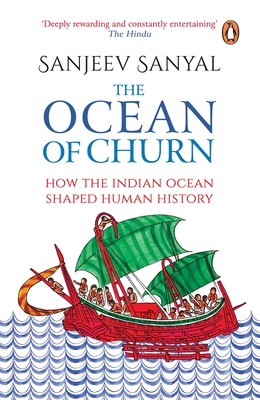 
Backordered
In this ambitious book, bestselling author Sanjeev Sanyal chronicles the grand sweep of history from East Africa to Australia, conjuring the great cities of Angkor and Vijayanagar, medieval Arab empires and Chinese 'treasure fleets' in rich, vivid detail. He explores remote archaeological sites, maritime trading networks and half-forgotten oral tales to challenge established historical narratives with fresh evidence. Shining new light on medieval geopolitics and long-lost cities, The Ocean of Churn is a mesmerizing journey into the heart of a vibrant civilization.

Sanjeev Sanyal is the principal economic advisor to the Government of India and an internationally acclaimed economist and urban theorist. He writes on a range of topics ranging from economics to history, and is the author of the bestselling books Land of the Seven Rivers and The Indian Renaissance. In 2014, he was given the inaugural International Indian Achievers Award for contributions to literature. He has been a fellow of the Royal Geographical Society, London; visiting scholar at Oxford University; adjunct fellow at Institute of Policy Studies, Singapore; and a senior fellow of the World Wide Fund for Nature.
Sanjeev spent two decades working in international financial markets and was named Young Global Leader 2010 by the World Economic Forum. In 2007, he was awarded the Eisenhower Fellowship for his work on urban issues. Sanjeev attended Shri Ram College of Commerce, Delhi, and St. John's College, Oxford, where he was Rhodes Scholar. He lives in Delhi.