Kama: The Riddle of Desire (Paperback) 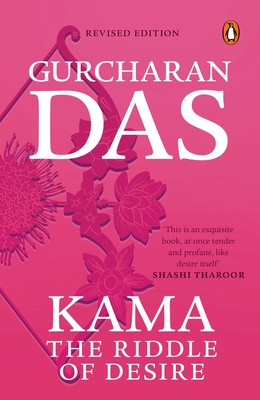 Kama: The Riddle of Desire (Paperback)

India is the only civilization to elevate kama-desire and pleasure-to a goal of life. Kama is both cosmic and human energy, which animates life and holds it in place. Gurcharan Das weaves a compelling narrative soaked in philosophical, historical and literary ideas in the third volume of his trilogy on life's goals: India Unbound was the first, on artha, 'material well-being'; and The Difficulty of Being Good was the second, on dharma, 'moral well-being'. Here, in his magnificent prose, he examines how to cherish desire in order to live a rich, flourishing life, arguing that if dharma is a duty to another, kama is a duty to oneself. It sheds new light on love, marriage, family, adultery and jealousy as it wrestles with questions such as these: How to nurture desire without harming others or oneself? Are the erotic and the ascetic two aspects of our same human nature? What is the relationship between romantic love and bhakti, the love of god?

Gurcharan Das is a renowned author, commentator and thought leader. He is the author of two bestsellers, India Unbound and The Difficulty of Being Good, which are volumes one and two of a trilogy on life's goals, of which Kama: The Riddle of Desire is the third.
His other literary works include a novel, A Fine Family, a collection of plays for the theatre, Three Plays, and a book of essays, The Elephant Paradigm. His last book, India Grows at Night was on the Financial Times' best books for 2013. He is general editor for Penguin's multivolume 'Story of Indian Business'. He studied philosophy at Harvard University and was CEO, Procter & Gamble India, before he became a full-time writer. He writes a regular column for six Indian newspapers, including the Times of India and occasional pieces for the Financial Times, Foreign Affairs and New York Times.
He lives with his wife in Delhi.