Semut: The Untold Story of a Secret Australian Operation in WWII Borneo (Paperback) 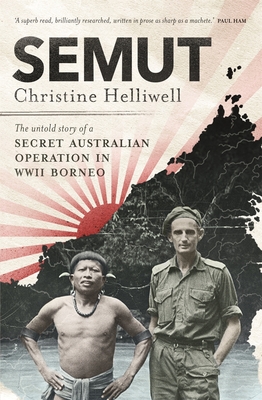 Semut: The Untold Story of a Secret Australian Operation in WWII Borneo (Paperback)


Backordered
A remarkable new book about Operation Semut, an Australian secret military operation launched by the organisation popularly known as Z Special Unit in the final months of WWII.

March 1945. A handful of young Allied operatives are parachuted into the remote jungled heart of the Japanese-occupied island of Borneo, east of Singapore, there to recruit the island’s indigenous Dayak peoples to fight the Japanese. Yet most have barely encountered Asian or indigenous people before, speak next to no Borneo languages, and know little about Dayaks, other than that they have been – and may still be – headhunters. They fear that on arrival the Dayaks will kill them or hand them over to the Japanese. For their part, some Dayaks have never before seen a white face.

So begins the story of Operation Semut, an Australian secret operation launched by the organization codenamed Services Reconnaisance Department – popularly known as Z Special Unit – in the final months of WWII.
Christine Helliwell is a New Zealand-born anthropologist, author and academic, currently Emeritus Professor at the Australian National University. She has been carrying out research on Borneo’s indigenous Dayak peoples – including living with them in their communities for months at a time – for almost forty years, and has written widely on Dayak social and cultural life.
"The incredible, little-known story of Australia’s top secret ‘Z’ operations deep inside Japanese lines in Sarawak in 1945 – aided by Dayak tribes who, with Australian approval, had resumed the ancient practice of headhunting . . . against Japanese patrols. Christine Helliwell records the dying months of the Pacific War, the terror of the Japanese, the world of the indigenous tribes, the intensity – down to the very smell and taste – of this jungle conflict with such menacing immediacy that this book will possess you long after you lay it down. A superb read, brilliantly researched, written in prose as sharp as a machete." —Paul Ham, author, Hiroshima Nagasaki: The Real Story of the Atomic Bombings and Their Aftermath