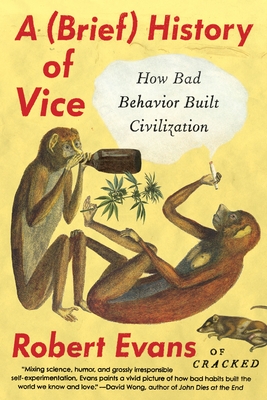 
Not On Our Shelves—Ships in 1-5 Days
A celebration of the brave, drunken pioneers who built our civilization one seemingly bad decision at a time, A Brief History of Vice explores a side of the past that mainstream history books prefer to hide. History has never been more fun—or more intoxicating.

Guns, germs, and steel might have transformed us from hunter-gatherers into modern man, but booze, sex, trash talk, and tripping built our civilization. Cracked editor Robert Evans brings his signature dogged research and lively insight to uncover the many and magnificent ways vice has influenced history, from the prostitute-turned-empress who scored a major victory for women’s rights to the beer that helped create—and destroy—South America's first empire. And Evans goes deeper than simply writing about ancient debauchery; he recreates some of history's most enjoyable (and most painful) vices and includes guides so you can follow along at home.

You’ll learn how to:

“Evans's goal is to investigate and illuminate the human tradition of merriment and debauchery, which he does with tact, humor, and insight.”—Publishers Weekly

“An engaging and compelling assemblage of pop culture and cultural anthropology (pop cultural anthropology?), an exploration of the growth of civilization via things that our own culture has in many ways declared taboo. This is one of the more entertaining books, fiction or nonfiction, or whatever, that you'll read this year.”—Allen Adams, The Maine Edge