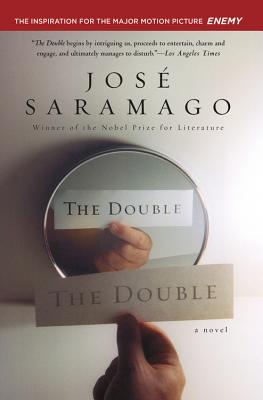 
Special Order—Subject to Availability
The inspiration for the major motion picture "Enemy" starring Jake Gyllenhaal and directed by Denis Villeneuve Tertuliano Máximo Afonso is a divorced, depressed history teacher. To lift his spirits, a colleague suggests he rent a certain video. Tertuliano watches the film, unimpressed. But during the night, when he is awakened by noises in his apartment, he goes into the living room to find that the VCR is replaying the video. He watches in astonishment as a man who looks exactly like him-or, more specifically, exactly like he did five years before, mustachioed and fuller in the face-appears on the screen. He sleeps badly.

Against his better judgment, Tertuliano decides to pursue his double. As he roots out the man's identity, what begins as a whimsical story becomes a "wonderfully twisted meditation on identity and individuality" (The Boston Globe). Saramago displays his remarkable talent in this haunting tale of appearance versus reality.

JOSÉ SARAMAGO (1922–2010) was the author of many novels, among them Blindness, All the Names, Baltasar and Blimunda, and The Year of the Death of Ricardo Reis. In 1998 he was awarded the Nobel Prize for Literature.

PRAISE FOR THE CAVE
"Yet another triumph, albeit a typically melancholy one, for Portugal's, or even the world's, greatest living novelist." -The Washington Post Book World
"[Saramago] has the power to throw a dazzling flash of lightning on his subjects, an eerily and impossibly prolonged moment of clarity that illuminates details beyond the power of sunshine to reveal." -Chicago Tribune