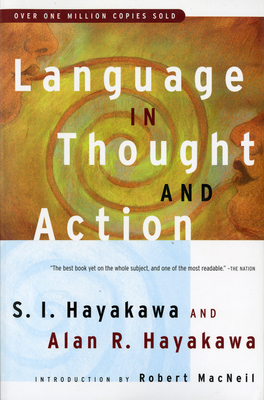 In an era when communication has become increasingly diverse and complex, this classic work on semantics—now fully revised and updated—distills the relationship between language and those who use it.

Renowned professor and former U.S. Senator S. I. Hayakawa discusses the role of language in human life, the many functions of language, and how language—sometimes without our knowing—shapes our thinking in this engaging and highly respected book. Provocative and erudite, it examines the relationship between language and racial and religious prejudice; the nature and dangers of advertising from a linguistic point of view; and, in an additional chapter called “The Empty Eye,” the content, form, and hidden message of television, from situation comedies to news coverage to political advertising.

ALAN R. HAYAKAWA is a journalist and freelance writer who assisted in preparing the latest edition of his father S. I. Hayakawa's classic book on semantics, Language in Thought and Action.