Viruses, Plagues, and History: Past, Present, and Future (Paperback) 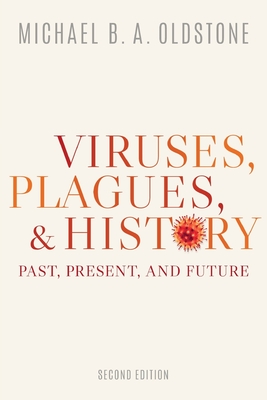 Viruses, Plagues, and History: Past, Present, and Future (Paperback)

By Michael B. a. Oldstone


Not On Our Shelves—Ships in 1-5 Days
More people were killed by smallpox during the twentieth century--over 300 million--than by all of the wars of that period combined. In 1918 and 1919, influenza virus claimed over 50 million lives. A century later, influenza is poised to return, ongoing plagues of HIV/AIDS and hepatitis
infect millions, and Ebola, Zika, and West Nile viruses cause new concern and panic. The overlapping histories of humans and viruses are ancient. Earliest cities became both the cradle of civilization and breeding grounds for the first viral epidemics. This overlap is the focus of virologist/immunologist Michael Oldstone in Viruses, Plagues and History. Oldstone explains
principles of viruses and epidemics while recounting stories of viruses and their impact on human history. This fully updated second edition includes engrossing new chapters on hepatitis, Zika, and contemporary threats such as the possible return of a catastrophic influenza, and the impact of fear
of autism on vaccination efforts. This is a fascinating panorama of humankind's longstanding conflict with unseen viral enemies, both human successes--such as control of poliomyelitis, measles, smallpox and yellow fever, and continued dangers--such as HIV and Ebola. Impeccably researched and
accessibly written, Viruses, Plagues and History will fascinate all with an interest in how viral illnesses alter the course of human history.

Michael B. A. Oldstone is a member (Professor) at The Scripps Research Institute where he directed the Laboratory of Viral-Immunobiology. He received multiple international and national awards for the fruits of his contribution to virology and immunology and has been elected to severalinternational and national academic societies including the National Academy of Sciences (USA) and the Scandinavian Society for Immunology. He has been a consultant to multiple institutions including the World Health Organization and the National Institutes of Health (USA).