India Connected: How the Smartphone Is Transforming the World's Largest Democracy (Paperback) 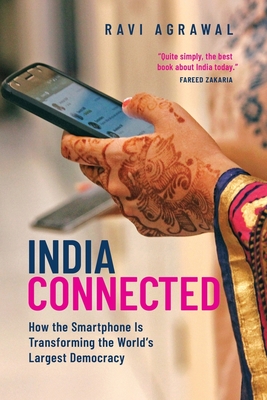 India Connected: How the Smartphone Is Transforming the World's Largest Democracy (Paperback)


Not On Our Shelves—Ships in 1-5 Days
India is connecting at a dizzying pace. In 2000, roughly 20 million Indians had access to the internet. In 2017, 465 million were online, with three new people logging on for the first time every second. By 2020, the country's online community is projected to exceed 700 million; more than a
billion Indians are expected to be online by 2025. While users in Western countries progressed steadily over the years from dial-up connections on PCs, to broadband access, wireless, and now 4G data on phones, in India most have leapfrogged straight into the digital world with smartphones and
affordable data plans. What effect is all this having on the ancient and traditionally rural culture dominated by family and local customs? Ravi Agrawal explores that very question, seeking out the nexuses of change and those swept up in them. Smartphones now influence arranged marriages, create an extension of one's
social identity that moves beyond caste, bring within reach educational opportunities undreamed of a generation ago, bridge linguistic gaps, provide outlets and opportunities for start-ups, and are helping to move the entire Indian economy from cash- to credit-based. The effects are everywhere, and
they are transformative. While they offer immediate access to so much for so many, smartphones are creating no utopia in a culture still struggling with poverty, illiteracy, corruption, gender inequality, and income disparity. Internet access has provided greater opportunities to women and altered how India's outcasts
interact with the world; it has also made pornography readily available and provided an echo chamber for rumor and prejudice. Under a government determined to control content, it has created tensions. And in a climate of hypernationalism, it has fomented violence and even terrorism. The influence of smartphones on the world's largest democracy is pervasive and irreversible, disruptive and creative, unsettling and compelling. Agrawal's fascinating book gives us the people and places reflecting what the internet hath wrought. India Connected reveals both its staggering dimensions
and implications, illuminating how it is affecting the progress of progress itself.

Ravi Agrawal is an award-winning journalist and media executive. He is currently the managing editor of Foreign Policy and previously worked at CNN for over a decade in London, New York, and New Delhi, where he served as the network's India bureau chief. Agrawal was born in London, grew up inKolkata, and attended college at Harvard. He splits his time between Brooklyn and Washington, DC.