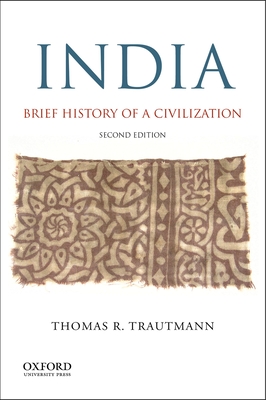 
Not On Our Shelves—Ships in 1-5 Days
India: Brief History of a Civilization, Second Edition, provides a brief overview of a very long period, allowing students to acquire a mental map of the entire history of Indian civilization in a short book. Most comprehensive histories devote a few chapters to the early history of India and an increasing number of pages to the more recent period, giving an impression that early history is mere background and that Indian civilization finds its fulfillment in the nation-state. Thomas R. Trautmann believes that the deep past lives on and is a valuable resource for understanding the present day and for creating a viable future. The result is a book that is short enough to read in a few sittings, but comprehensive in coverage--5,000 years of India in brief.

Thomas R. Trautmann is Professor Emeritus of History at the University of Michigan. He is the editor of The Aryan Debate (OUP, 2008) and the author of Elephants and Kings: An Environmental History (2015), Arthashastra: The Science of Wealth (2012), Languages and Nations (2006), and Aryans and British India (2004).