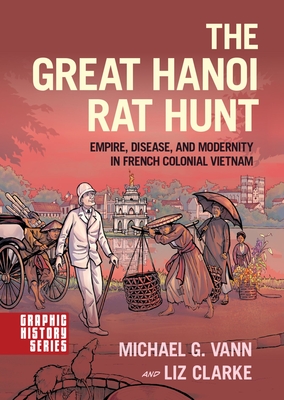 
Not On Our Shelves—Ships in 1-5 Days
The Great Hanoi Rat Hunt: Empire, Disease, and Modernity in French Colonial Vietnam tells the darkly humorous story of the French colonial state's failed efforts to impose its vision of modernity upon the colonial city of Hanoi, Vietnam. Part of the Graphic Histories series, this book offers a case study in the history of imperialism, highlighting the racialized economic inequalities of empire, colonization as a form of modernization, and industrial capitalism's creation of a radical power differential between the West and the
rest. On a deeper level, The Great Hanoi Rat Hunt examines the contradictions unique to the French Third Republic's colonial civilizing mission, the development of Vietnamese resistance to French rule, and the history of disease. Featuring forty-nine primary sources--many available in English for
the first time--and three full-color maps, The Great Hanoi Rat Hunt illustrates the ironic and tragic ways in which modernization projects can have unintended consequences.

Michael G. Vann is Professor of History at Sacramento State University. Liz Clarke is a professional illustrator based in Cape Town, South Africa.