Antiquities: What Everyone Needs to Know(r) (Paperback) 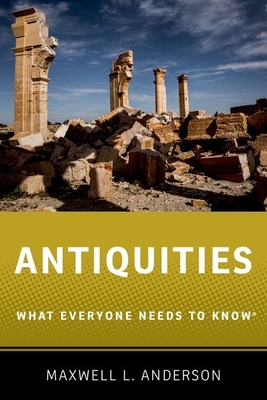 Antiquities: What Everyone Needs to Know(r) (Paperback)


Not On Our Shelves—Ships in 1-5 Days
The destruction of ancient monuments and artworks by the Taliban in Afghanistan and the Islamic State in Iraq and Syria has shocked observers worldwide. Yet iconoclastic erasures of the past date back at least to the mid-1300s BCE, during the Amarna Period of ancient Egypt's 18th dynasty. Far more damage to the past has been inflicted by natural disasters, looters, and public works. Art historian Maxwell Anderson's Antiquities: What Everyone Needs to Know(R) analyzes continuing threats to our heritage, and offers a balanced account of treaties and laws governing the circulation of objects; the history of collecting antiquities; how forgeries are made and detected; how authentic works are documented, stored, dispersed, and displayed; the politics of sending antiquities back to their countries of origin; and the outlook for an expanded legal market. Anderson provides a summary of challenges ahead, including the future of underwater archaeology, the use of drones, remote sensing, and how invisible markings on antiquities will allow them to be traced. Written in question-and-answer format, the book equips readers with a nuanced understanding of the legal, practical, and moral choices that face us all when confronting antiquities in a museum gallery, shop window, or for sale on the Internet.

Dr. Maxwell L. Anderson has researched, published, and presented exhibitions of ancient artworks for more than thirty years. He was a curator in the Department of Greek and Roman Art at The Metropolitan Museum of Art for over six years, held teaching positions in the field of Roman art history at the University of Rome II, Princeton University, and Emory University, and spent nearly three decades as an art museum director, most recently at the Dallas Museum of Art. In 2002, while President of the Association of Art Museum Directors, he formed a Task Force on Archaeological Materials & Ancient Art, which he chaired for the better part of a decade, fostering responsible collecting practices among museums. He is now Executive Director of the New Cities Foundation.