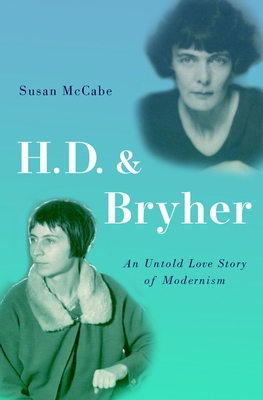 
Not On Our Shelves—Ships in 1-5 Days
H.D. & Bryher: An Untold Love Story of Modernism takes on the daring task of examining the connection between two queer women, one a poet and the other a historical novelist, living from the late 19th century through the 20th century. When they met in 1918, H.D. was a modernist poet, married
to a shell-shocked adulterous poet, and pregnant by another man. She fell in love with Bryher, who was entrapped by her wealthy secretive family. Their bond grew over Greek poetry, geography, ancient history and literature, the telegraph, and telepathy. They felt their love-and their true identities
existed invisibly- a giddy, and disturbing element to their relationship; they lived off and on in distant geographies, though in near continual contact. This book exposes why literary history has occluded this love story of the world wars and poetic modernism.

Susan McCabe is a professor of English and Creative Writing at USC, and has published Elizabeth Bishop: Her Poetics of Loss (1994) and Cinematic Modernism (2005) and received as well the Agha Shahid Prize for a book of poems, Descartes' Nightmare (2008).