Why Comrades Go to War: Liberation Politics and the Outbreak of Africa's Deadliest Conflict (Paperback) 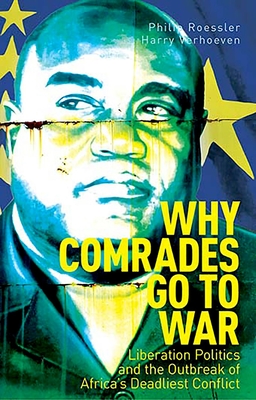 Why Comrades Go to War: Liberation Politics and the Outbreak of Africa's Deadliest Conflict (Paperback)


Not On Our Shelves—Ships in 1-5 Days
(This book cannot be returned.)
In October 1996, a motley crew of ageing Marxists and unemployed youth coalesced to revolt against Mobutu Seso Seko, president of Zaire/Congo since 1965. The rebels of the AFDL marched over 1500km in seven months to crush the dictatorship, heralding liberation as a second independence for Central Africa as a whole. US President Bill Clinton toasted AFDL leader Laurent-D sir Kabila and his regional allies -- having developed a unique camaraderie and personal trust on the region's battlefronts -- as a 'new generation of African leaders' ushering in an 'African Renaissance.' Within months, however, the Pan-Africanist alliance fell apart. The AFDL's collapse triggered a cataclysmic fratricide between the heroes of liberation that became the deadliest conflict since the Second World War, drawing in eight African countries. This book draws on hundreds of interviews with protagonists from Africa and the international community to offer a novel theoretical and empirical account of Africa's Great War. Bridging the gap between comparative politics and international relations, it argues that the renewed outbreak of calamitous violence in August 1998 was a function of the kind of regime the AFDL was and how its leaders saw Congo, the region and themselves. As a Pan-Africanist liberation movement, the collapse of the AFDL government internally and the unravelling of regional order externally were inextricably linked.

Philip Roessler is an assistant professor in the Department of Government at the College of William and Mary, where he is also Director of the Center for African Development. He is the author of Ethnic Politics and State Power in Africa: The Logic of the Coup-Civil War Trap (2016). Harry Verhoeven is an assistant professor at the School of Foreign Service of Georgetown University in Qatar. He is the Convenor of the Oxford University China-Africa Network and author of Water, Civilization and Power in Sudan: The Political Economy of Military-Islamist State Building (2015).