The Beauty of Baudelaire: The Poet as Alternative Lawgiver (Hardcover) 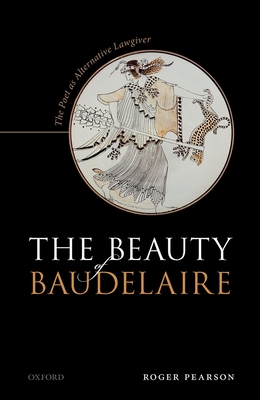 The Beauty of Baudelaire: The Poet as Alternative Lawgiver (Hardcover)


Not On Our Shelves—Ships in 1-5 Days
This book offers the first comprehensive close reading in any language of the complete works of Charles Baudelaire (1821-1867). Taking full account of his critical writings on literature and the fine arts, it provides fresh readings of Les Fleurs du Mal and Le Spleen de Paris. It situates
these works within the context of nineteenth-century French literature and culture and reassesses Baudelaire's reputation as the 'father' of modern poetry. Whereas he is traditionally considered to have rejected the public role of the writer as moralist, educator, and political leader and to have
dedicated himself instead to the exclusive pursuit of beauty in art, this book contends not only that he rejected Art for Art's sake but that he saw in 'beauty'--defined not as an inherent quality but as an effect of harmony and rich conjecture--an alternative ethos with which to resist the
tyrannies of ideology and conformism. Contrarian in his thinking and provocatively innovative in his poetic practice, Baudelaire fell foul of the law when six poems in Les Fleurs du Mal (1857) were banned for obscenity. In the second edition (1861), substantially recast and enlarged, the poet as alternative lawgiver made plainer still
his resistance to the orthodoxies of his day. In a series of major critical articles he proclaimed the 'government of the imagination', while from 1855 until his death he developed an alternative literary form, the prose poem--a thing of beauty and an invitation to imagine the world afresh, to make
our own rules.

Roger Pearson, Emeritus Professor of French, University of Oxford; Emeritus Fellow, The Queen's College, Oxford Roger Pearson is Emeritus Professor of French at the University of Oxford and Emeritus Fellow of The Queen's College, Oxford. His research is focused on French literature of the eighteenth and nineteenth centuries. His publications include monographs on Stendhal, Voltaire, and Mallarm�, a biographyof Voltaire, and translations of Voltaire, Zola, and Maupassant. His previous book, Unacknowledged Legislators: The Poet as Lawgiver in Post-Revolutionary France (2016), was awarded the R. Gapper Prize by the Society for French Studies. He is a Fellow of the British Academy.