Catholics and Treason: Martyrology, Memory, and Politics in the Post-Reformation (Hardcover) 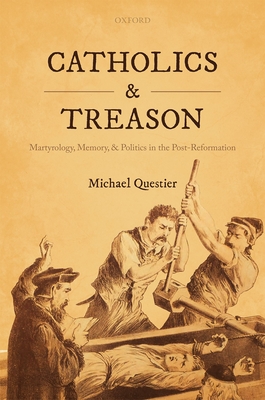 Catholics and Treason: Martyrology, Memory, and Politics in the Post-Reformation (Hardcover)


Special Order—Subject to Availability
(This book cannot be returned.)
Catholics and Treason takes the narratives generated by the contemporary law of treason as it applied to Roman Catholics, during and after the Reformation of the Church in the sixteenth century, and uses them to explore the Catholic community's writing of its own history. Prosecutions of
Catholics under the existing law and via new legislation produced a great deal of documentation which tells us much about contemporary politics that we could not garner from any other source. The intention here is to locate the narratives of persecution inside the context of the 'mainstream' history
of the period from which, for the most part, they have been routinely excluded but out of which they partly emerged. In that respect, this is the history of the post-Reformation Church and State with the politics (of violence) put back. This volume takes as its starting point the magnum opus of
Bishop Richard Challoner, his Memoirs of Missionary Priests, and it works backwards from that book into the period that Challoner describes. Historian Michael Questier seeks to reassemble as far as possible the historical jigsaw puzzle on which Challoner laboured but which he could not complete,
thinking about the implications for our view of the post-Reformation and of the way in which Challoner and others described the Catholic experience of in/tolerance.
Michael Questier, Hon. Chair, Centre for Catholic Studies, Theology Department, University of Durham Formerly professor of history in the University of London, and Leverhulme Research Professor 2015-2017, Michael Questier moved to a research chair at the University of Vanderbilt in 2018 and is now attached to the Centre for Catholic Studies at the University of Durham.