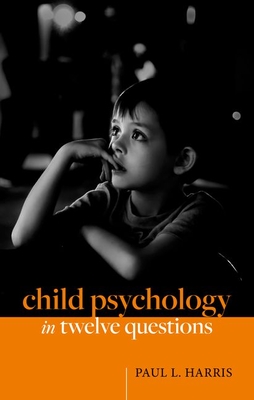 
Not On Our Shelves—Ships in 1-5 Days
Child psychology as a scientific enterprise is about 100 years old, but while numerous textbooks and practical guides are available, the more meditative questions about the nature of a child's mind are rarely asked. This book explores some of the enduring questions in developmental psychology: How do children form an attachment to their caregivers? How do they learn words? In their imagination, are they confused - or clear-sighted - about the difference between fantasy and reality? How do they decide who to trust? In each case, Paul Harris shows why these questions are important, proposes likely answers, and explains the uncertainties that persist. He outlines important landmarks, both well-known and neglected, and explores broader questions about theories of mind, morality, and cross-cultural differences.

Paul L. Harris, Victor S. Thomas Professor of Education, Harvard University Paul L. Harris is a developmental psychologist with interests in the development of cognition, emotion, and imagination. After studying psychology at Sussex and Oxford, he taught at the University of Lancaster, the Free University of Amsterdam, and the London School of Economics. In 1980, he moved to Oxford where he became Professor of Developmental Psychology and Fellow of St John's College. In 2001, he migrated to Harvard University where he teaches developmental psychology in the Graduate School of Education. He is a fellow of the British Academy and the American Academy of Arts and Sciences. His book Trusting What You're Told: How Children Learn from Others (Harvard University Press, 2012) won the Cognitive Development Society Book Award in 2013 and the Eleanor Maccoby Book Award from the American Psychological Association in 2014.