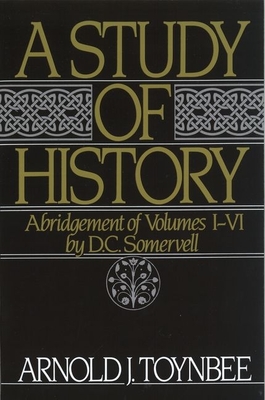 
Not On Our Shelves—Ships in 1-5 Days
(This book cannot be returned.)
Arnold Toynbee's A Study of History has been acknowledged as one of the greatest achievements of modern scholarship. A ten-volume analysis of the rise and fall of human civilizations, it is a work of breath-taking breadth and vision. D.C. Somervell's abridgement, in two volumes, of this magnificent enterprise, preserves the method, atmosphere, texture, and, in many instances, the very words of the original. Originally published in 1947 and 1957, these two volumes are themselves a great historical achievement.
Volume 1, which abridges the first six volumes of Toynbee's study, includes the Introduction, The Geneses of Civilizations, and The Disintegrations of Civilizations. Volume 2, an abridgement of Volumes VII-X, includes sections on Universal States, Universal churches, Heroic Ages, Contacts Between Civilizations in Space, Contacts Between Civilizations in Time, Law and Freedom in History, The Prospects of the Western Civilization, and the Conclusion.
Of Somervell's work, Toynbee wrote, The reader now has at his command a uniform abridgement of the whole book, made by a clear mind that has not only mastered the contents but has entered into the writer's outlook and purpose.

The late Arnold Toynbee was Director of Studies at the Royal Institute of International Affairs and Research Professor of International History at the University of London and author of numerous other books, including Mankind and Mother Earth: A Narrative History of the World. The late D.C. Somervell was a teacher at Tonbridge School in England.