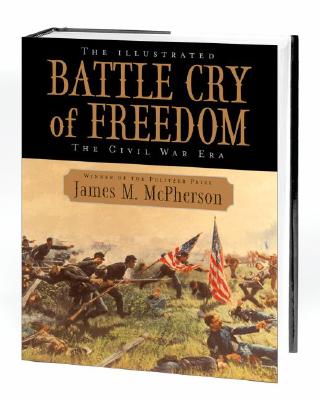 
Not On Our Shelves—Ships in 1-5 Days
(This book cannot be returned.)
Winner of the 1988 Pulitzer Prize for History and a New York Times Bestseller, Battle Cry of Freedom is universally recognized as the definitive account of the Civil War. It was hailed in The New York Times as historical writing of the highest order. The Washington Post called it the finest single volume on the war and its background. And The Los Angeles Times wrote that of the 50,000 books written on the Civil War, it is the finest compression of that national paroxysm ever fitted between two covers.
Now available in a splendid new edition is The Illustrated Battle Cry of Freedom. Boasting some seven hundred pictures, including a hundred and fifty color images and twenty-four full-color maps, here is the ultimate gift book for everyone interested in American history. McPherson has selected all the illustrations, including rare contemporary photographs, period cartoons, etchings, woodcuts, and paintings, carefully choosing those that best illuminate the narrative. More important, he has written extensive captions (some 35,000 words in all, virtually a book in themselves), many of which offer genuinely new information and interpretations that significantly enhance the text. The text itself, streamlined by McPherson, remains a fast-paced narrative that brilliantly captures two decades of contentious American history, from the Mexican War to Lee's surrender at Appomattox. The reader will find a truly masterful chronicle of the war itself--the battles, the strategic maneuvering on both sides, the politics, and the personalities--as well as McPherson's thoughtful commentary on such matters as the slavery expansion issue in the 1850s, the origins of the Republican Party, the causes of secession, internal dissent and anti-war opposition in the North and the South, and the reasons for the Union's victory.
A must-have purchase for the legions of Civil War buffs, The Illustrated Battle Cry of Freedom is both a spectacularly beautiful volume and the definitive account of the most important conflict in our nation's history.

James M. McPherson is the George Henry Davis '86 Professor of History at Princeton University and the President of the American Historical Association. Widely acclaimed as the leading historian of the Civil War, he is the author of Crossroads of Freedom: Antietam (a New York Times bestseller), For Cause and Comrades (winner of a Lincoln Prize), and many other books on Lincoln and the Civil War era.