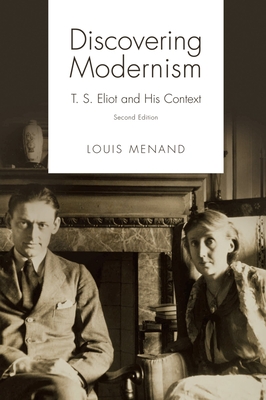 
Not On Our Shelves—Ships in 1-5 Days
(This book cannot be returned.)
When Discovering Modernism was first published, it shed new and welcome light on the birth of Modernism. This reissue of Menand's classic intellectual history of T.S. Eliot and the singular role he played in the rise of literary modernism features an updated Afterword by the author, as well as a detailed critical appraisal of the progression of Eliot's career as a poet and critic. The new Afterword was adapted from Menand's critically lauded essay on Eliot in The Cambridge History of Literary Criticism, Volume Seven: Modernism and the New Criticism. Menand shows how Eliot's early views on literary value and authenticity, and his later repudiation of those views, reflect the profound changes regarding the understanding of literature and its significance that occurred in the early part of the twentieth century. It will prove an eye-opening study for readers with an interest in the writings of T.S. Eliot and other luminaries of the Modernist era.

Louis Menand is Professor of English and American Literature and Language at Harvard University and former Distinguished Professor of English at the City University of New York Graduate Center. He is the author of the Pulitzer Prize-winning New York Times bestseller The Metaphysical Club, and is a well-known essayist and critic for the New Yorker magazine. His next work will feature the art and thought of the Cold War period from 1945 to 1965.