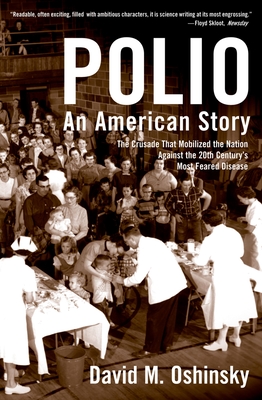 
Not On Our Shelves—Ships in 1-5 Days
Here David Oshinsky tells the gripping story of the polio terror and of the intense effort to find a cure, from the March of Dimes to the discovery of the Salk and Sabin vaccines--and beyond. Drawing on newly available papers of Jonas Salk, Albert Sabin and other key players, Oshinsky paints
a suspenseful portrait of the race for the cure, weaving a dramatic tale centered on the furious rivalry between Salk and Sabin. He also tells the story of Isabel Morgan, perhaps the most talented of all polio researchers, who might have beaten Salk to the prize if she had not retired to raise a
family. Oshinsky offers an insightful look at the National Foundation for Infantile Paralysis, which was founded in the 1930s by FDR and Basil O'Connor, it revolutionized fundraising and the perception of disease in America. Oshinsky also shows how the polio experience revolutionized the way in which the
government licensed and tested new drugs before allowing them on the market, and the way in which the legal system dealt with manufacturers' liability for unsafe products. Finally, and perhaps most tellingly, Oshinsky reveals that polio was never the raging epidemic portrayed by the media, but in
truth a relatively uncommon disease. But in baby-booming America--increasingly suburban, family-oriented, and hygiene-obsessed--the specter of polio, like the specter of the atomic bomb, soon became a cloud of terror over daily life. Both a gripping scientific suspense story and a provocative social and cultural history, Polio opens a fresh window onto postwar America.

David M. Oshinsky is Professor of History at New York University and Director of the Division of Medical Humanities at the NYU School of Medicine. A leading historian of modern American politics and society, he is the author of A Conspiracy So Immense: The World of Joe McCarthy and Worse ThanSlavery: Parchman Farm and the Ordeal of Jim Crow Justice, both of which won major prizes and were New York Times Notable Books.