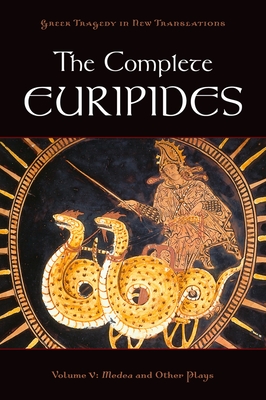 
Not On Our Shelves—Ships in 1-5 Days
(This book cannot be returned.)
Based on the conviction that only translators who write poetry themselves can properly re-create the celebrated and timeless tragedies of Aeschylus, Sophocles, and Euripides, the Greek Tragedy in New Translations series offers new translations that go beyond the literal meaning of the Greek in order to evoke the poetry of the originals. This volume collects Euipides' Alcestis (translated by William Arrowsmith), a subtle drama about Alcestis and her husband Admetos, which is the oldest surviving work by the dramatist; Medea (Michael Collier and Georgia Machemer), a moving vengeance story and an excellent example of the prominence and complexity that Euripides gave to female characters; Helen (Peter Burian), a genre breaking play based on the myth of Helen in Egypt; and Cyclops (Heather McHugh and David Konstan), a highly lyrical drama based on a celebrated episode from the Odyssey. This volume retains the informative introductions and explanatory notes of the original editions and adds a single combined glossary and Greek line numbers.

Peter Burian is Professor of Classical and Comparative Literatures and Theater Studies at Duke University. Alan Shapiro is Professor of English and Creative Writing at the University of North Carolina at Chapel Hill. A winner of the prestigious Lila Wallace Reader's Digest award 1992-95, he is the author of several poetry collections, including Tantalus in Love, Song and Dance, and The Dead Alive Busy.