Modern Japan: A History in Documents (Pages from History) (Paperback) 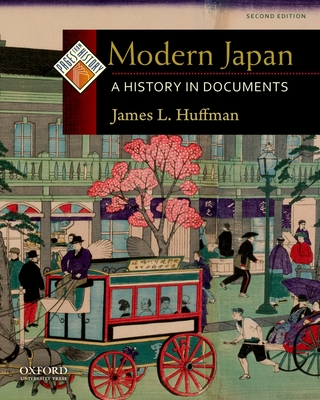 Modern Japan: A History in Documents (Pages from History) (Paperback)


Not On Our Shelves—Ships in 1-5 Days
Employing a wide range of primary source materials, Modern Japan: A History in Documents, Second Edition, provides a colorful narrative of Japan's development since 1600. A variety of diary entries, letters, legal documents, and poems brings to life the early modern years, when Japan largely shut itself off from the outside world. A picture essay highlights the tumultuous decade and a half following the arrival of Commodore Matthew Perry and the U.S. Navy in 1853, which led to unprecedented changes and a new government. The dramatic rush to modernity in the late 1800s and early 1900s--accompanied by Japan's entry into the imperialist rivalry--is seen through travel accounts, novelists' recollections, and imperial rescripts, while editorial cartoons and prison memoirs recount the early twentieth-century rush, first toward pluralism, then toward war. Japan's recovery after defeat in World War II and its emergence as a vibrant democracy with the second largest economy in the world
is chronicled through records as diverse as a funeral eulogy, a comic book description of Adam Smith's economic theories, and an e-journal interview. The documents are woven together in a scintillating narrative that brings to life one of the world's most remarkable national stories. The second edition includes an updated introduction with a note on sources and interpretation and twenty-five new documents including new evidence of Japanese imperialism, especially its expansion into Korea; the role of minorities in modern society; and events since the mid-1990s. There are additional editorial cartoons from the Meiji and Taisho eras, rare photos, archival maps, as well as excerpts from fiction and other literature, and updated further reading and website lists.

James L. Huffman is H. Orth Hirt Professor of History Emeritus at Wittenberg University. He is the author of several books, including Japan in World History (OUP, 2009), and A Yankee in Meiji Japan: The Crusading Journalist Edward H. House (2003), and the editor of Modern Japan: An Encyclopedia of History, Culture, and Nationalism (1997).