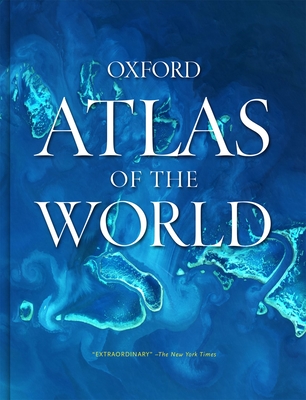 
Special Order—Subject to Availability
The only world atlas updated annually, guaranteeing that users will find the most current geographic information, Oxford's Atlas of the World is the most authoritative atlas on the market. Full of crisp, clear cartography of urban areas and virtually uninhabited landscapes around the globe, the Atlas is filled with maps of cities and regions at carefully selected scales that give a striking view of the Earth's surface. It opens with a fascinating look at world statistics, a six-page special on "Plastic Pollution" and satellite images of earth, including 8-10 stunning new images specially sourced and processed for this atlas by experts. The extraordinarily extensive front matter continues with a "Gazetteer of Nations" that has been comprehensively checked and updated to include recent economic and political changes. The 48-page "Introduction to World Geography" is beautifully illustrated with tables and graphs on numerous topics of geographic significance, such as climate change, oceans and seas, population and cities, migrants and refugees, conflict and co-operation, energy and minerals, tourism and travel, health, wealth and standards of living. The hundreds of city and world maps that form the body of the Atlas have been thoroughly updated for this 27th edition. Providing the finest global coverage available, the Atlas of the World is not only the best-selling volume of its size and price, but also the benchmark by which all other atlases are measured.

Oxford University Press is a department of the University of Oxford. It is our mission to further the University's objective of excellence in research, scholarship, and education by publishing worldwide.