A Line of Blood and Dirt: Creating the Canada-United States Border Across Indigenous Lands (Hardcover) 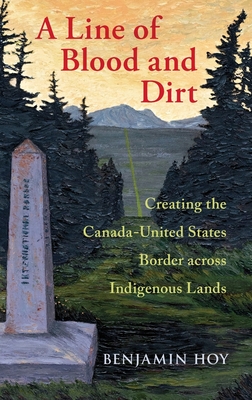 A Line of Blood and Dirt: Creating the Canada-United States Border Across Indigenous Lands (Hardcover)


Not On Our Shelves—Ships in 1-5 Days
The untold history of the multiracial making of the border between Canada and the United States. Often described as the longest undefended border in the world, the Canada-United States border was born in blood, conflict, and uncertainty. At the end of the American Revolution, Britain and the United States imagined a future for each of their nations that stretched across a continent. They signed treaties with one another dividing lands neither country could map, much less control. A century and a half later, they had largely fulfilled those earlier ambitions. Both countries had built nations that stretched from the Atlantic to the Pacific and had created an expansive international border that restricted movement. The vision that seemed so clear in the minds of diplomats and politicians was never so well-defined on the ground. As A Line of Blood and Dirt argues, both countries built their border across Indigenous lands using hunger, violence, and coercion to displace existing communities and to disrupt their ideas of territory and belonging. Drawing on oral histories, map visualizations, and archival sources, Benjamin Hoy reveals the role Indigenous people played in the development of the international boundary, as well as the impact the border had on Indigenous people, European settlers, Chinese migrants, and African Americans. Unable to prevent movement at the border's physical location for over a century, Canada and the United States instead found ways to project fear across international lines. Bringing together the histories of tribes, immigration, economics, and the relationship of neighboring nations, A Line of Blood and Dirt offers a new history of Indigenous peoples and the borderland.

Benjamin Hoy is an assistant professor of history at University of Saskatchewan, where he directs the Historical GIS Lab.