Sanctions: What Everyone Needs to Know(r) (Paperback) 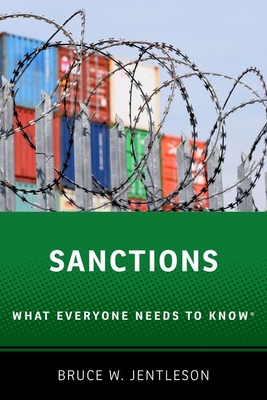 Sanctions: What Everyone Needs to Know(r) (Paperback)


On Our Shelves Now at:
A concise, authoritative overview of a little-understood yet extremely important phenomenon in world politics: the use of economic sanctions by one country to punish another. It's hard to browse the news without seeing reports of yet another imposition of sanctions by one country on another. The United States has sanctions against more than 30 countries. Russia has repeatedly imposed sanctions against former Soviet republics. China has developed its own approach, including targeting private entities such as the NBA. And it's not just major powers: Japan and South Korea have sanctioned each other over WWII and colonial legacies; Saudi Arabia against Qatar because of differences over Iran; and France, Germany, and Norway against Brazil over the Amazon forest and climate change. In Sanctions: What Everyone Needs to Know(R), Bruce Jentleson--one of America's leading scholars on the subject--answers the fundamental questions about sanctions today: Why are they used so much? What are their varieties? What are the key factors affecting their success? Why have they become the tool of first resort for states engaged in international conflict? Jentleson demonstrates
that examining sanctions is key to understanding international relations and explains how and why they will likely continue to bear on global politics.

Bruce W. Jentleson is William Preston Few Professor of Public Policy and Professor of Political Science at Duke University, as well as a 2022 Distinguished Fellow of the Woodrow Wilson International Center for Scholars and Non-Resident Senior Fellow at the Chicago Council on Global Affairs. He received the 2018 American Political Science Association (APSA) International Security Section Joseph J. Kruzel Award for Distinguished Public Service. He has served in a number of US foreign policy positions, including as Senior Advisor to the State Department Policy Planning Director (2009-11). He is Co-Director of the Bridging the Gap project promoting greater policy relevance among academics. His other books include The Peacemakers, American Foreign Policy, The End of Arrogance, and Pipeline Politics.