Once We Were Slaves: The Extraordinary Journey of a Multi-Racial Jewish Family (Hardcover) 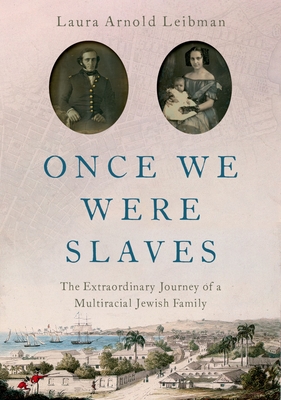 Once We Were Slaves: The Extraordinary Journey of a Multi-Racial Jewish Family (Hardcover)


In Stock—Click for Locations
An obsessive genealogist and descendent of one of the most prominent Jewish families since the American Revolution, Blanche Moses firmly believed her maternal ancestors were Sephardic grandees. Yet she found herself at a dead end when it came to her grandmother's maternal line. Using family
heirlooms to unlock the mystery of Moses's ancestors, Once We Were Slaves overturns the reclusive heiress's assumptions about her family history to reveal that her grandmother and great-uncle, Sarah and Isaac Brandon, actually began their lives as poor Christian slaves in Barbados. Tracing the
siblings' extraordinary journey throughout the Atlantic World, Leibman examines artifacts they left behind in Barbados, Suriname, London, Philadelphia, and, finally, New York, to show how Sarah and Isaac were able to transform themselves and their lives, becoming free, wealthy, Jewish, and--at
times--white. While their affluence made them unusual, their story mirrors that of the largely forgotten population of mixed African and Jewish ancestry that constituted as much as ten percent of the Jewish communities in which the siblings lived, and sheds new light on the fluidity of race--as well
as on the role of religion in racial shift--in the first half of the nineteenth century.

Laura Arnold Leibman is Professor of English and Humanities at Reed College in Portland, OR. Her work focuses on religion and the daily lives of women and children in early America, and uses everyday objects to help bring their stories to life. She is the author of The Art of Jewish Family: AHistory of Women in Early New York in Five Objects (BGC 2020), winner of three National Jewish Book Awards, and Messianism, Secrecy and Mysticism: A New Interpretation of Early American Jewish Life (Vallentine Mitchell, 2012), which won a National Jewish Book Award, a Jordan Schnitzer Book Awardfrom the Association for Jewish Studies. Known, too, for her scholarship in Digital Humanities, Laura served as the Academic Director for the award-winning multimedia public television series American Passages: A Literary Survey (2003).