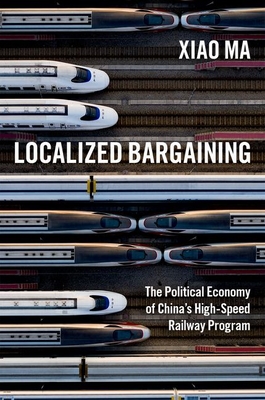 
Not On Our Shelves—Ships in 1-5 Days
(This book cannot be returned.)
Looks at the rollout of one of the largest infrastructure programs in human history to show how local governments play a complex role. China's high-speed railway network is one of the largest infrastructure programs in human history. Despite global media coverage, we know very little about the political process that led the government to invest in the railway program and the reasons for the striking regional and temporal variation in such investments. In Localized Bargaining, Xiao Ma offers a novel theory of intergovernmental bargaining that explains the unfolding of China's unprecedented high-speed railway program. Drawing on a wealth of in-depth interviews, original data sets, and surveys with local officials, Ma details how the bottom-up bargaining efforts by territorial authorities--whom the central bureaucracies rely on to implement various infrastructure projects--shaped the allocation of investment in the railway system. Demonstrating how localities of different types invoke institutional and extra-institutional sources of bargaining power in their competition for railway stations, Ma sheds new light on how the
nation's massive bureaucracy actually functions.

Xiao Ma is an assistant professor of political science at Peking University. He teaches and conducts research on comparative political institutions, political economy of development, and Chinese politics. In particular, Ma's research examines how institutions and incentives shape elite behaviors and policymaking in developing states like China. His research is published or forthcoming in numerous political science and area studies journals, including Journal of East Asian Studies, Security Studies, Political Communication, The China Review, Journal of Contemporary China, China: An International Journal, The China Quarterly, and Journal of Chinese Governance.