The Puritan Cosmopolis: The Law of Nations and the Early American Imagination (Oxford Studies in American Literary History) (Paperback) 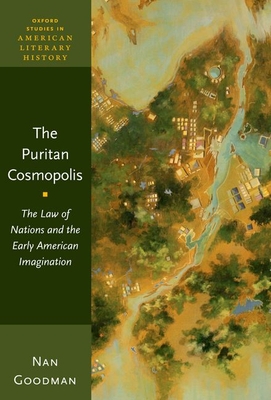 The Puritan Cosmopolis: The Law of Nations and the Early American Imagination (Oxford Studies in American Literary History) (Paperback)


Not On Our Shelves—Ships in 1-5 Days
(This book cannot be returned.)
The Puritan Cosmopolis traces a sense of kinship that emerged from within the larger realm of Puritan law and literature in late seventeenth-century New England. Nan Goodman argues that these early modern Puritans-connected to the cosmopolis in part through travel, trade, and politics-were
also thinking in terms that went beyond feeling affiliated with people in remote places, or what cosmopolitan theorists call attachment at a distance. In this way Puritan writers and readers were not simply learning about others, but also cultivating an awareness of themselves as ethically related
to people all around the world. Such thought experiments originated and advanced through the law, specifically the law of nations, a precursor to international law and an inspiration for much of the imagination and literary expression of cosmopolitanism among the Puritans. The Puritan Cosmopolis
shows that by internalizing the legal theories that pertained to the world writ large, the Puritans were able to experiment with concepts of extended obligation, re-conceptualize war, contemplate new ways of cultivating peace, and rewrite the very meaning of Puritan living. Through a detailed
consideration of Puritan legal thought, Goodman provides an unexpected link between the Puritans, Jews, and Ottomans in the early modern world and reveals how the Puritan legal and literary past relates to present concerns about globalism and cosmopolitanism.

Nan Goodman is Arts and Sciences Professor of Distinction and Professor of English and Jewish Studies at the University of Colorado Boulder. She is the author of Banished: Common Law and the Rhetoric of Social Exclusion in Early New England (2012), and Shifting the Blame: Literature, Law, and the Theory of Accidents in Nineteenth-Century America (1998).