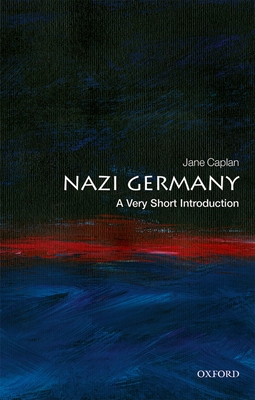 
On Our Shelves Now at:
Any consideration of the 20th century would be incomplete without a discussion of Nazi Germany, an extraordinary regime which dominated European history for 12 years, and left a legacy that still echoes with us today. The incredible force of the destructive vision at the heart of Nazi Germany led to a second world war when the world was still aching from the first one, and an incomprehensible death count, both at home and abroad. In this Very Short Introduction, Jane Caplan's insightful analysis of Nazi Germany provides a highly relevant reminder of the fragility of democratic institutions, and the ways in which the exploitation of national fears, mass political movements, and frail political opposition can lead to the imposition of dictatorship. Considering the emergence and popular appeal of the Nazi party, she discusses the relationships between belief, consent, and terror in securing the regime, alongside the crucial role played by Hitler himself. Covering the full history of the regime, she includes an unflinching look at the dark stains of war, persecution, and genocide. At the same time, Caplan offers unexpected angles of vision and insights; asking readers to look behind the handful of over-used images of Nazi Germany we are familiar with, and to engage critically with a history that that is so abhorrent it risks seeming beyond interpretation. ABOUT THE SERIES: The Very Short Introductions series from Oxford University Press contains hundreds of titles in almost every subject area. These pocket-sized books are the perfect way to get ahead in a new subject quickly. Our expert authors combine facts, analysis, perspective, new ideas, and enthusiasm to make interesting and challenging topics highly readable.

Jane Caplan is Professor Emeritus of Modern European Historyat the University of Oxford, and Emeritus Fellow of St Antony's College, Oxford. Her main fields of research and publication are the history of Nazi Germany, the relationship between states, bureaucracies and everyday life, and the history of the technologies of individual identification in modern Europe. She is a member of the German ministerial commissions investigating the history of the finance ministry and the interior ministry in Nazi Germany, and has been an editor of History Workshop Journal, the UK's leading radical history journal, for many years. She has also authored and edited several books, including Concentration Camps in Nazi Germany: The New Histories (Routledge, 2020) and Nazi Germany (OUP, 2008) for the Oxford Short History of Germany series.