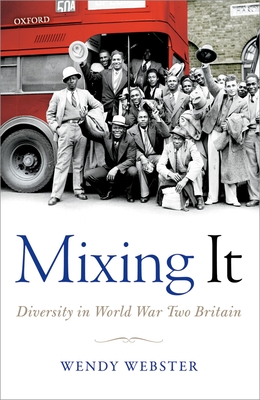 
Not On Our Shelves—Ships in 1-5 Days
During the Second World War, people arrived in Britain from all over the world as troops, war-workers, nurses, refugees, exiles, and prisoners-of-war-chiefly from Europe, America, and the British Empire. Between 1939 and 1945, the population in Britain became more diverse than it had ever been before. Through diaries, letters, and interviews, Mixing It tells of ordinary lives pushed to extraordinary lengths. Among the stories featured are those of Zbigniew Siemaszko - deported by the Soviet Union, fleeing Kazakhstan on a horse-drawn sleigh, and eventually joining the Polish army in Scotland via Iran, Iraq, and South Africa - and 'Johnny' Pohe - the first Maori pilot to serve in the RAF, who was captured, and eventually murdered by the Gestapo for his part in the 'Great Escape'. This is the first book to look at the big picture of large-scale movements to Britain and the rich variety of relations between different groups. When the war ended, awareness of the diversity of Britain's wartime population was lost and has played little part in public memories of the war. Mixing It recovers this forgotten history. It illuminates the place of the Second World War in the making of multinational, multiethnic Britain and resonates with current debates on immigration.

Wendy Webster is Professor of Modern Cultural History at the University of Huddersfield and has published widely on twentieth-century history. She has been a Visiting Fellow at Australian National University and the University of Tasmania. Her previous books include Not A Man to Match Her: The Marketing of a Prime Minister (1990), Imagining Home (1998), and the prize-winning Englishness and Empire (2005). Mixing It is part of a wider project involving a display at Imperial War Museum North.