The Astronomer and the Witch: Johannes Kepler's Fight for His Mother (Paperback) 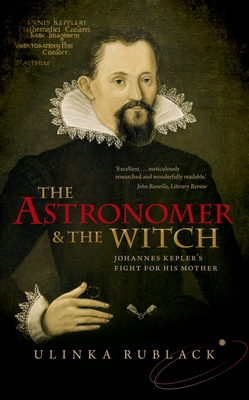 The Astronomer and the Witch: Johannes Kepler's Fight for His Mother (Paperback)


Special Order—Subject to Availability
Johannes Kepler (1571-1630) was one of the most admired astronomers who ever lived and a key figure in the scientific revolution. A defender of Copernicus''s sun-centered universe, he famously discovered that planets move in ellipses, and defined the three laws of planetary motion. Perhaps less well known is that in 1615, when Kepler was at the height of his career, his widowed mother Katharina was accused of witchcraft. The proceedings led to a criminal trial that lasted six years, with Kepler conducting his mother's defense. In The Astronomer and the Witch, Ulinka Rublack pieces together the tale of this extraordinary episode in Kepler's life, one which takes us to the heart of his changing world. First and foremost an intense family drama, the story brings to life the world of a small Lutheran community in the centre of Europe at a time of deep religious and political turmoil--a century after the Reformation, and on the threshold of the Thirty Years' War. Kepler's defense of his mother also offers us a fascinating glimpse into the great astronomer's world view, on the cusp between Reformation and scientific revolution. While advancing rational explanations for the phenomena which his mother's accusers attributed to witchcraft, Kepler nevertheless did not call into question the existence of magic and witches. On the contrary, he clearly believed in them. And, as the story unfolds, it appears that there were moments when even Katharina's children wondered whether their mother really did have nothing to hide...

Ulinka Rublack is Professor at the University of Cambridge and has published widely on early modern European history as well as approaches to history. She edited the Oxford Concise Companion to History (2011), and, most recently, the Oxford Handbook of the Protestant Reformation (2016). Hermonographs include Reformation Europe (2005), The Crimes of Women in Early Modern Germany (1999), and Dressing Up: Cultural Identity in Renaissance Europe (2010), which won the Roland H. Bainton Prize.