The Politics of Everyday Europe: Constructing Authority in the European Union (Paperback) 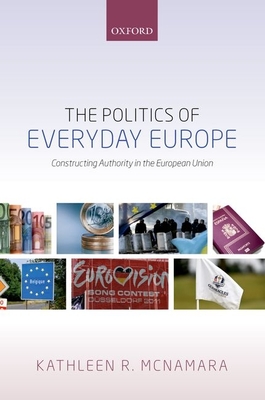 The Politics of Everyday Europe: Constructing Authority in the European Union (Paperback)


Not On Our Shelves—Ships in 1-5 Days
How do political authorities build support for themselves and their rule? Doing so is key to accruing power, but it can be a complicated affair. The European Union, as a novel political entity, faces a particularly difficult set of challenges. The Politics of Everyday Europe argues that the legitimation of EU authority rests in part on a transformation in the symbols and practices of everyday life in Europe. The Single Market and the Euro, European citizenship and the dismantling of borders within Europe, EU public architecture, arts and popular entertainment, and EU diplomacy and foreign policy are important not only for their material effects but for how they change peoples' day-to-day experiences and naturalize European governance. The modern nation-state has long used similar strategies to legitimize its political power. But the EU's cultural infrastructure is unique, as it navigates national identities with a particularly banality, framing the EU as complementary to, rather than in competition with, the nation-states. These underlying social processes have supported the surprising political development of the EU, but they do so in a way that makes EU authority inherently fragile. As economic and political crises have stretched European social solidarity to the breaking point, this book offers a clear theoretical framework for understanding how everyday culture matters and how the construction of meaning can be a potent power resource--albeit one open to contestation and subversion by the very citizens it calls into being.

Kathleen R. McNamara is an Associate Professor of Government and Foreign Service, and Director of the Mortara Center for International Studies at Georgetown University. She is the author of The Currency of Ideas: Monetary Politics in the European Union (Cornell University Press, 1998), co-editor of Making History: European Integration and Institution Change at Fifty (Oxford University Press, 2007) and has published numerous essays on the sociology of the European Union, international political economy, central banking, and the role of ideas and culture in policymaking. McNamara has taught at Princeton University and Sciences Po (Paris), and has been a visiting scholar at the Russell Sage Foundation, a German Marshall Fund Fellow, and a Fulbright Fellow. She is a participant in a variety of government and NGO policy groups, and a Member of the Council on Foreign Relations.