The Press and the People: Cheap Print and Society in Scotland, 1500-1785 (Hardcover) 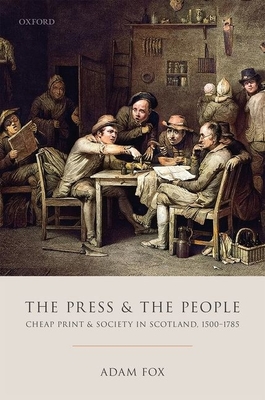 The Press and the People: Cheap Print and Society in Scotland, 1500-1785 (Hardcover)


Not On Our Shelves—Ships in 1-5 Days
The Press and the People is the first full-length study of cheap print in early modern Scotland. It traces the production and distribution of ephemeral publications from the nation's first presses in the early sixteenth century through to the age of Burns in the late eighteenth. It explores the development of the Scottish book trade in general and the production of slight and popular texts in particular. Focusing on the means by which these works reached a wide audience, it illuminates the nature of their circulation in both urban and rural contexts. Specific chapters examine single-sheet imprints such as ballads and gallows speeches, newssheets and advertisements, as well as the little pamphlets that contained almanacs and devotional works, stories and songs. The book demonstrates just how much more of this literature was once printed than now survives and argues that Scotland had a much larger market for such material than has been appreciated. By illustrating the ways in which
Scottish printers combined well-known titles from England with a distinctive repertoire of their own, The Press and the People transforms our understanding of popular literature in early modern Scotland and its contribution to British culture more widely.