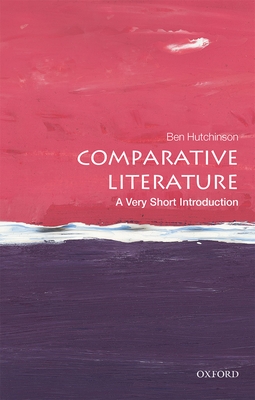 
In Stock—Click for Locations
Comparative Literature is both the past and the future of literary studies. Its history is intimately linked to the political upheavals of modernity: from colonial empire-building in the nineteenth century to the postcolonial culture wars of the twenty-first century, attempts at comparison
have defined the international agenda of literature. But what is comparative literature? Ambitious readers looking to stretch themselves are usually intrigued by the concept, but uncertain of its implications. And rightly so, in many ways: even the professionals cannot agree on a single term,
calling it comparative in English, compared in French, and comparing in German. The very term itself, when approached comparatively, opens up a Pandora's box of cultural differences. Yet this, in a nutshell, is the whole point of comparative literature. To look at literature comparatively is to realize just how much can be learned by looking over the horizon of one's own culture. In an age that is paradoxically defined by migration and border crossing on the one hand, and by a
retreat into monolingualism and monoculturalism on the other, the cross-cultural agenda of comparative literature has become increasingly central to the future of the Humanities. We are all, in fact, comparatists, constantly making connections across languages, cultures, and genres as we read. The
question is whether we realize it. Outlining the complex history and competing theories of comparative literature, Ben Hutchinson offers an accessible means of entry into a notoriously slippery subject. Ultimately, he places comparative literature at the very heart of literary criticism, for as George Steiner once noted, to read is
to compare. ABOUT THE SERIES: The Very Short Introductions series from Oxford University Press contains hundreds of titles in almost every subject area. These pocket-sized books are the perfect way to get ahead in a new subject quickly. Our expert authors combine facts, analysis, perspective, new ideas, and
enthusiasm to make interesting and challenging topics highly readable.

Ben Hutchinson is Professor of European Literature at the University of Kent. He is a Fellow of the Academia Europaea, a Philip Leverhulme Prize winner, and a Member of the Executive Committee of the British Comparative Literature Association (BCLA), as well as a regular contributor to newspapersincluding the Times Literary Supplement (TLS) and the Literary Review. His publications include Rilke's Poetics of Becoming (2006), W. G. Sebald. Die dialektische Imagination (2009), Modernism and Style (2011), and Lateness and Modern European Literature (2016).