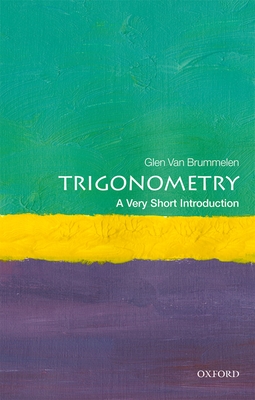 
On Our Shelves Now at:
Born of the desire to understand the workings of motions of the heavenly bodies, trigonometry gave the ancient Greeks the ability to predict their futures. Most of what we see of the subject in school comes from these heavenly origins; 15th century astronomer Regiomontanus called it "the foot of the ladder to the stars." In this Very Short Introduction Glen Van Brummelen shows how trigonometry connects mathematics to science, and has today become an indispensable tool in predicting cyclic patterns like animal populations and ocean tides. Its historical journey through major cultures such as medieval India and the Islamic World has taken it through disciplines such as geography and even religious practice. Trigonometry has also been a major player in the most startling mathematical developments of the modern world. Its interactions with the concept of infinity led to Taylor and Fourier series, some of the most practical tools of modern science. The birth of complex numbers led to a shocking union of exponential and trigonometric functions, creating the most beautiful formulas and powerful modelling tools in science. Finally, as Van Brummelen shows, trigonometry allows us to explore the strange new worlds of non-Euclidean geometries, opening up bizarre possibilities for the shape of space itself. And indeed, one of those new geometries - spherical - takes us full circle back to ancient Greek astronomers and European navigators, who first used it to chart their ways across the heavens and the earth. ABOUT THE SERIES:
The Very Short Introductions series from Oxford University Press contains hundreds of titles in almost every subject area. These pocket-sized books are the perfect way to get ahead in a new subject quickly. Our expert authors combine facts, analysis, perspective, new ideas, and enthusiasm to make interesting and challenging topics highly readable.

Glen Van Brummelen is Coordinator of mathematics at Quest University. He has served twice as President of the Canadian Society for History and Philosophy of Mathematics. His books include The Mathematics of the Heavens and the Earth: The Early History of Trigonometry (Princeton, 2009) and Heavenly Mathematics: The Forgotten Art of Spherical Trigonometry (Princeton, 2013). Van Brummelen won the Haimo Award for Distinguished Teaching in 2016, and the following year won the 3M National Teaching Fellowship, Canada's most prestigious award for educational leadership.